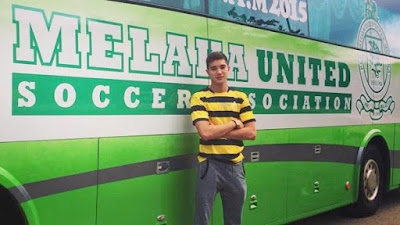 KUALA LUMPUR — Melaka United players and coaches were already bracing for the worst.

Yet when they were informed of Marco Stefan Petrovski’s passing, the Premier League outfit were in a state of shock and disbelief.

The 18-year-old Australian-born goalkeeper died yesterday after he was hospitalised following a freak accident on April 5 where he and defender Muhd Afiq Azuan were struck by lightning while training at Padang Sepuluh in Krubong, Malacca. Afiq survived the incident.

One man hit the most was coach Mat Zan Mat Aris.

“He was so young … only 18. Although he joined us earlier this season, we could see his potential,” he said.

“When he joined us, he was a scrawny goalkeeper. He took it upon himself to bulk up and to prove he was good enough to be fielded.

“Sadly, he never got the opportunity to be part of the first 11.”

Mat Zan said Petrovski, of Serbian-Malaysian parentage, was part of the senior team but had trained with the President’s Cup players on that unfortunate day.

“When he is not selected to play for a league match, he will train with the President’s Cup team.”

"We knew he was in a critical situation after the incident. We prayed for the best but were already bracing for the worst. Still, this (news of his death) comes as a shock to all of us."

Mat Zan said the naturalised footballer had aspirations of playing and ending his career in the M-League.

“His mother is Sabahan and he was keen of playing here. He could have made it big. But it was not meant to be.”

He described Petrovski as “fun and full of energy”.

“He mixed well with the others and was always teasing them. He was always smiling and that is what I will miss the most.

“The players are devastated. They loved him. We are on our way to Kangar for our match against Perlis (tomorrow). The match will be a tribute to him.”
football malacca malacca united Marco Stefan Petrovski presidents cup