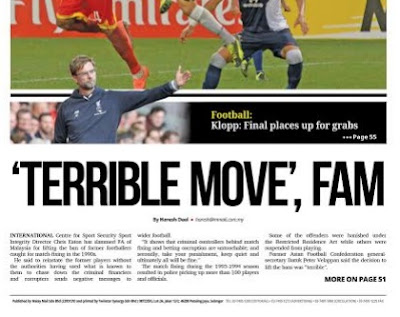 KUALA LUMPUR — FA of Malaysia’s (FAM) decision to lift the ban of former footballers caught match-fixing in the 1990s has sparked a heated debate among observers and officials.
While some stressed the players should be given a second chance, others said the group destroyed M-League and killed Malaysian football.

“Has it ever recovered? The ramifications are still being felt today not just in Malaysia but regionally and many ways internationally,” said International Centre for Sport Security Sport Integrity Director Chris Eaton.

“What happened in Malaysia 22 years ago set a negative tone in regional football and exposed the methods of criminals. But actions, or more accurately inaction, that contained official responses merely to players, allowed a criminal match-fixing and betting fraud trend from Malaysia to improve its methods and to connect and expand globally.
“From that day Malaysia and to a similar extent Singapore, became the birth place of internationalised match fixing in football.”

He said to reinstate the former players without the authorities having used what is known to them to chase down the criminal financiers and corrupters sends negative messages.
“It shows that criminal controllers behind match-fixing and betting corruption are untouchable; and secondly, take your punishment, keep quiet and ultimately all will be fine.”

He said football was in a global crisis due to endemic match-fixing and administrative corruption.

FAM, had on Monday, said  former players were now free to participate in all football-related activities at state and national levels.

Of the six players  serving life bans, FAM would appeal to Fifa and Asian Football Confederation.

The match fixing during the 1993-1994 season resulted in police picking up more than 100 players and officials.

Some offenders were banished under the Restricted Residence Act while others were suspended from playing.

“I remember organising a seminar in Kuala Lumpur in 1976 where we got  police chiefs from Asian countries to address match-fixing. And we are still talking about it till today,” he said.
He questioned why the authorities had not hauled up any bookies or fixers over the past two decades.

“Through them (the former players) we should understand the workings of syndicates and eventually find out who are behind match-fixing. But we have not seen anything.

“The decision is not in the interest of the game. It’s a step in the wrong direction and these former footballers do not deserve a second chance,” he said.

KUALA LUMPUR — Former FA of Malaysia (FAM) general-secretary Datuk Dell Akhbar Khan (pic) said it was unfair to blame the 84 former players, who served bans for match-fixing, for the drop in standard of Malaysian football.

Malaysia is ranked 174 in the world standings — its worst position ever.

“It’s quite difficult for us to say that (blame them) ... it’s been 22 years and if at all, it should be FAM maintaining the standards of Malaysian football,” he said.

“Some of them may have been directly involved, others indirectly. But we’re lumping them altogether. We must treat the cases individually.”

Police nabbed more than 100 players and officials following a major swoop on match-fixing during the 1993-1994 season which virtually paralysed Malaysian football.

Dell, who served FAM between 2000 and 2005, said it must be made clear how long were the players supposed to serve the bans.

Only six were slapped with life bans while FAM  remained silent, during their announcement on Monday, on the length of the bans for the others.

“To say we have not caught any bookie or fixer ... now that’s a question the enforcement agencies must answer. It remains unclear if FAM,  throughout the 22 years, asked any of the players to reveal the workings of syndicates,” said Dell, who was Kuala Lumpur Chief Police Officer from 2002 until 2004.

“(The lifting of ban) is debatable. It depends how you want to approach it but it must be done rationally,” he said.

Former national player Datuk Santokh Singh said he was part of the team that lobbied for the lifting of the ban.

“Although they are now able to participate in football-related activities, it is up to the state FAs to decide if they are right for the teams or not,” he said.