Sungai Batu is a big deal 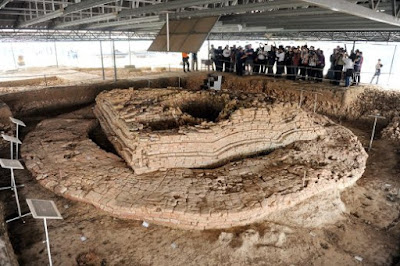 The centuries-old secret of Sungai Batu — once referred to as Kataha in Sanskrit — is simply mind blowing as archaeologists are unearthing more items including remnants of ancients barges and items which described what life was in this region in the first and early second centuries.

A decade ago, an archaeological team from Universiti Sains Malaysia discovered other relics including iron-smelting facilities, monuments, jetties and administrative buildings in the area which is within Kedah’s Bujang Valley.

Some historians argue the relics found are not as old as they are believed to be. Others insist Sungai Batu deserves to be called a Unesco heritage site for there are enough evidence to prove it is the oldest civilisation in the region – dating earlier than the famous Angkor Wat in Cambodia (built in the ninth century) and the Borobodur Temple in Indonesia (12th century).

Sungai Batu remains a big deal to the region’s history. Research in the Bujang Valley started in the 1840s and has come a long way since.

Yet, to many, the other Sungai seems to be the main attraction — Sungai Besar — where a three-cornered fight between Barisan Nasional, Amanah and PAS is expected to take place ahead of the June 18 by-election.

If only people paid the same enthusiasm and attention towards Sungai Batu. And yes, spend the same money, if not more, on Sungai Batu.

If history is not your thing, then think of the commercial value of such a historical site. Cambodia and Indonesia are reaping millions, if not billions, of ringgit in tourism money as visitors flock to see the Angkor Wat and Borobodur Temple annually. Now imagine the same here.

It is imperative that the Kedah and federal governments assist the archaeological team working at the site. It is time we roped in experts to assist in our investigations to learn more about this civilisation.
The site must be safeguarded at all cost. A Unesco team from France visited the Bujang Valley in 1987 and recommended the whole area be protected, reminded historian Datuk V. Nadarajan during the recent two-day-old Kedah International Conference.

It is clear we did not take heed of such a recommendation. In 2013, a candi (temple) at Bujang Valley was bulldozed by a developer while villagers, in need of building materials, had for decades taken away rocks from the site.

It comes to no surprise history lovers had created an online petition to preserve the historical site from further destruction.

If we continue to ignore history and pay little heed to the good work by our archaeologists, we can say goodbye to the nation’s and region’s prized possession – the Bujang Valley.

Time to visit the National Library

I visited the National Library at Jalan Tun Razak last Friday. It was an interesting experience as the last time I stepped into the building was years ago.

However, my fondest memories of the National Library was when it was located in Wisma Thakurdas. It was there I used to spend most of my weekends. It was also a good opportunity to pray at the Gurdwara located in the building.

Back to my visit last Friday, I was amazed with the exhibition at the library’s lobby — Pameran Khazanah Warisan Malaysia. On display were several old publications including the Khalq al-Samawati wal-Ard, the oldest manuscript in the library published in 1637, and a copy of a well-preserved Malay Mail dated Jan 25, 1906.

I was lucky to be given a mini-tour where I was brought to the library’s “dark ‘vault’’ where its Koleksi Nadir is placed. There were rows of books that were more than 100-years-old. It gave me goose bumps.

One of the oldest book there was Voiage de Gautier Schouten aux Indes Orientales published in 1708. It was written by Gutier Schouten who related his experience travelling to Eastern India.

“The lights are switched off to better preserve the books,” said a library official.

“Here is where we have our oldest collections. Members of the public can read them at a special reading room here but are not allowed to take the books home.”

I then tweeted “When was the last time you visited the National Library?” and among those who responded was former Deputy Higher Education Minister Saifuddin Abdullah.

“Long time ago. They hv (have) lots of room for improvement. I prefer more specialised libraries,” the PKR man said.

We can help improve the national library but we must visit it often to better understand what it lacks and take steps to make it right. We need more people spending time there.

“Times have changed. Everything is available online. We also have online services which are free,” said another senior official.

“The reading culture is generally diminishing. We are trying very hard through various promotions but we need the community to help us in our quest as well.

“While information is available at the palm of your hand these days, it is the experience of spending time at the library that makes a difference.”

And she is right. I would like to spend more time at the National Library — or any other library for the matter of fact. I suggest you do the same too for it is an experience no device can ever replicate.


HARESH believes in the quote “we must learn from the past to prepare for the future”. He can be reached at  haresh@mmail.com.my or  on Twitter @HareshDeol
bujang valley haresh deol Haresh Says history kedah Malay Mail national library Sungai Batu sungai besar