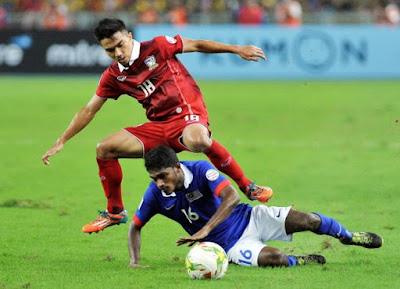 In a posting on Johor Southern Tigers page, Kunalan said this morning he was proud to wear the national jersey since his Under-23 team days.

“Thank you for the support and guidance all these years. I truly appreciate it.”

Amirulhadi made his intention public on his Facebook account before it was posted on Johor Southern Tigers page at 12.20pm.

“I thank the fans and all involved, including coach (Datuk) Ong (Kim Swee), who’ve been supportive throughout my journey with the national team.

“That’s all I can contribute to the team. This decision allows younger players to continue the team’s mission,” he said.

Their last international outing was the Oceania Tour last month.

Many see this as an orchestrated move by JDT to show their displeasure towards the FA of Malaysia (FAM) and national team management. JDT owner Tunku Ismail Ibrahim has been vocal against FAM in the past.

Social media was abuzz with the resignations as fans said those who turned their backs on the national team should not be given a second chance. Others said Ong would need to quickly move on to prepare the team ahead of the AFF Cup in November.

Ong was tongue-tied when captain Safiq and Aidil quit on Tuesday, unable to explain why they chose to leave. He was not informed by the players of their decisions.

The national team, under former coach Dollah Salleh, suffered a humiliating episode last year after losing 10-0 to United Arab Emirates in their 2018 World Cup qualifying campaign — the worst defeat in the history of Malaysian football.

Ong took over soon after but fans continued to ridicule the team's performances especially in the recent Oceania Tour.