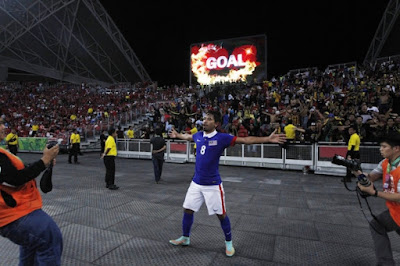 FIRST they let their country down. Now, they turn their backs on the Jalur Gemilang.

It appears the spat between Johor Darul Ta'zim and the FA of Malaysia (FAM) has escalated to a new level.

And more are expected to abandon the sinking ship as the national team continues to produce unconvincing results since the 10-0 thrashing by United Arab Emirates during the World Cup qualifying match last year.

National coach Datuk Ong Kim Swee was tongue tied when asked to comment about the resignations yesterday. But he is bracing for more to leave.

Insiders say more JDT players are expected to discard the national colours, leaving Kim Swee in a lurch as he prepares the team for the Asean Football Federation Cup in November.

JDT owner, Tunku Ismail Ibrahim, in his latest criticism against the national team, said the footballers were prone to injuries as they had "only 11-12 days of training throughout their 30-day tour with the national team."

"From June 19-28 they only had four days of training sessions compared to JDT that conducted 19 sessions over the same period. That is the reason why they are injury probe.

"If the players' injuries happen during games and they are roughed up, I can accept it, but if injuries are due to the lack of training, I cannot tolerate it," the Crown prince of Johor said.

He asked those in FAM if there were occupying seats for a specific goal or just to "receive monthly remuneration and cater to own personal interests".

Insiders believe this is the beginning to what could turn into an ugly affair that could see the national team disintegrate.

"Ong would have to rely on new players. But it's going to be tough. It's not like we have a large pool of talent to choose from. We tend to see the same faces all the time," said an insider.

"This could turn ugly for Ong, the national team and FAM. With only four months left before the AFF Cup, there is little that can be done. You can't expect miracles overnight."

Another source said FAM top brass was expected to discuss this matter urgently so as to not disrupt the national team's preparation for the AFF Cup.

"There must be a plan without these two JDT players, and an alternative one if all the JDT players decide to leave. Ong will need to move on quickly. Otherwise, he will suffer the same fate as (former coach) Dollah Salleh did."

The Johor team is now eyeing another shot at glory - the Malaysia Cup. The southern team managed a 2-2 draw against PKNS in a Group C match last night.

"Johor is a fantastic team, has a fantastic set-up ... a team even FAM can learn from. If only both sides would get along. We could then finally see the national team out of the doldrums," a coach, who wished to be anonymous, said.
aidil zafuan abdul radzak FA of Malaysia football Malaysia Ong Kim Swee Safiq Rahim