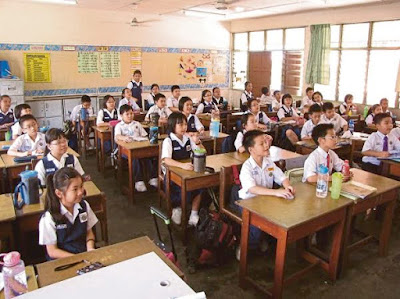 HE has been going for additional classes over the weekends, hoping to make his parents proud as he sits for his first major examinations — UPSR — in September.

Twelve-year-old Rashid hopes to score straight As in the Year 6 national examinations which would then allow him to gain entry into the elite Maktab Rendah Sains Mara to fulfill his parents’ dreams.

I pity Rashid as boys his age should be running about kicking a football in the evenings. Sadly, his parents insist what he and his classmates learn in school is inadequate and that times have changed.
But I would sympathise with Rashid even more if his planned vacation with his family at Legoland after the examinations will be dashed if he is forced to re-sit the examination.

The 2014 UPSR fiasco continues to haunt pupils, teachers and parents as they continue to wonder who was (or were) the culprit(s)?

Two years ago, close to half a million pupils were forced to re-sit their Science, Mathematics, English Language and Tamil Language papers following a leak.

It created a massive uproar, disrupting holiday plans and stressing pupils who were forced resit the papers a month after they had sat for them.

The Education Ministry reassigned Examinations Syndicate director Na’imah Ishak and deputy director of operations Wan Ilias Wan Salem. The duo were later cleared of any offence relating to the incident.

Two Tamil school teachers L. Subarau @ Kamalanathan, 36, from SJKT Ladang Batang Benar and Murugan Palanisamy, 34, from SJKT Ladang Lenggeng were acquitted by the Sessions Court in Seremban in April last year after they were charged with being in possession of images of leaked UPSR exam papers.

Judge Jagit Singh Bant Singh, had in his 101-page judgement, said: “The accused have not committed any offence and, as such, who caused the leakage remains unsolved.

“It is important that the actual culprit be identified and taken to task to avoid future examination leaks.”

On Monday, P. Uma Mageswari was acquitted of a similar charge under the Official Secrets Act 1972 at the Sessions Court in Kuala Kangsar.

As the learned judge Jagit had said, who caused the leakage remains unsolved. And yes, it is important that the actual culprit be identified and taken to task.

Were the printers involved? Were members of the Examinations Syndicate involved? These are the only two sources who would have access to the papers not the teachers. Are mobile phones allowed near the papers before they are sealed and distributed to schools?

These are questions the Education Ministry has, till today, failed to answer. Yet, they fail pupils and students who do not answer questions.

Promises and assurances there would not be leaks in the future are questionable.. We will only know if questions are once again ''secretly'' shared on WhatsApp.

A similar situation was seen in several nations recently.

Top officials of the Kenya National Examinations Council were arrested and charged over examination leaks after the board was dissolved in March.

Education Cabinet Secretary Fred Matiang’s was quoted by Capital News on March 24 as saying: “The government has decided that it is time for us to act and reform the institution and restore its credibility.

Last month, scores of officials, teachers and head of centres in Morocco and Algeria were charged with fraud for alleged involvement in leaking of school-leaving baccalaureat examination papers.
Egypt security forces dispersed a protest staged by hundreds of Thanaweya Amma secondary school students on June 27 at the Ministry of Education headquarters, calling for the minister’s immediate dismissal after a series of exam leaks.

Amr Ahmed, a parent of one of the student who participated in the protest was quoted by Egypt’s Daily News as saying: “We do not care about the identity of the one responsible. What angers us is the absence of openness and transparency by the minister of education.

“Transparency and openness are important factors in any successful policy of any minister or official. The minister should clearly explain the crisis in the media, so that Egyptians become aware of its details and how the ministry is planning to tackle it.”

As said earlier, we must name and shame those involved in the episode. The authorities must be transparent and explain how they are tackling the situation two years on.

Let’s not pretend to forget what has happened.

Otherwise, this will join a long list of fiasco in the country where the biggest and dirtiest culprits will get away scot-free.

HARESH is executive editor of Malay Mail. He can be reached at haresh@mmail.com.my or on Twitter@HareshDeol
haresh deol Haresh Says leaks Malay Mail UPSR