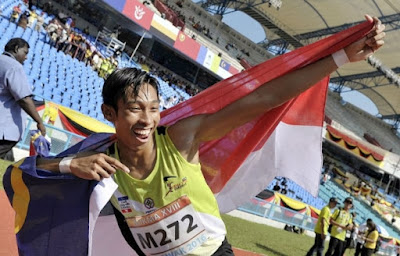 PETALING JAYA — The recent exploits of Khairul Hafiz Jantan prove the country has amazing talents and coaches who are capable of turning our youngsters into champions.

Khairul Hafiz Jantan broke the 100m national record of 10.30s after clocking 10.18s to win the gold medal at the Malaysia Games on Wednesday. He also registered a new 200m Games record after he bettered his timing from 21.14s to 21.03s — all within 24 hours. He smashed the 14-year-old Games record of 21.33s held by Nazmizan Muhammad.

“We are our worst enemies. We have plenty of talents but instead of saying nice things, we often doubt their capabilities,” said Kok Chi.

“The country has plenty of talents, our local coaches are capable of moulding champions. Why can’t we accept that fact and help them?”

He said there were certain officials who doubted Bardul Hisyam Abdul Manap’s 10.29s achieved during the Asean Schools Championship in Brunei last year and were secretly smiling when his timing was disputed following a technical boo-boo by the organisers.

“Some were happy when Badrul didn’t make it and some doubted Khairul Hafiz would be capable of breaking the 200m right after winning the 100m race. People had plenty to say but nothing to encourage him.”

He added it was high time schools be credited for their roles and that more attention be paid at the grassroots.

“Without Victoria Institution there would not be Sieh Kok Chi. My school gave me an opportunity to be a water polo athlete and I went on to represent the country. Schools are doing great jobs and they should be supported.

“The local coaches too have plenty to offer. It’s time we gave the younger coaches a chance to shine. Sadly, we prefer hiring foreigners ... I just don’t understand why.”

He hoped Tunku Mahkota Ismail sports school teacher Mohd Poad Kassim, who coaches Khairul Hafiz and Badrul, be given the support he needs.

“The boys don’t need another coach. If we are serious, we should assist them. We have many experts in the country and they should know what’s best.

“These boys are young, barely 20. They have a long way to go and have serious chances at making it big in the region. We should start grooming them for the SEA Games and perhaps the Asian Games.”
100m athletics badrul hisyam abdul manap haresh deol khairul hafiz jantan Malaysia Sieh Kok Chi