So what's next for FAM?

Tunku Ismail Ibrahim remains as president as "no resignation letter was submitted".

Insiders say Tunku Ismail was "very disturbed and feels unappreciated following critical comments, especially on social media, about the national team's FIFA ranking despite the many other achievements (as listed in the original post below) throughout his close to one year stint in office". 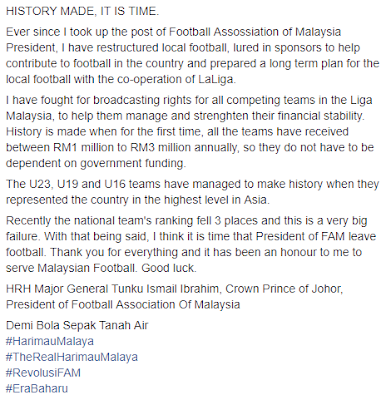 Several FA of Malaysia (FAM) officials will be in Johor Baru tomorrow to meet their president Tunku Ismail Ibrahim.

And a topic that will surely be raised is the Crown Prince of Johor's statement that appeared on the FA of Malaysia and Johor Southern Tigers Facebook pages about an hour ago.

The fourth paragraph of the statement read:

"Recently the national team's ranking fell 3 places and this is a very big failure. With that being said, I think it is time that (the) President of FAM leave football. Thank you for everything and it has been an honour to me to serve Malaysian Football. Good luck."

Why would TMJ want to leave?

- Is he fed-up with comments by critics regarding the Fifa ranking of the national team?
For the record, Harimau Malaysia is placed 178 out of 211 nations - the lowest ever recorded.

- Is he tired with the internal politics?

- Does he have a strained relationship with his deputy Datuk Seri Subahan Kamal?

Subahan did not attend the executive committee meeting on March 9, as reported by Utusan.

If Tunku Ismail leaves the hot seat, who will be the best candidate to replace him?

Well, there's Tan Sri Annuar Musa who tried his luck last year but eventually pulled out from the race, allowing TMJ to win the post uncontested.

Subahan will be tasked to steer the ship temporarily as FAM would naturally call for an election.

We will surely then see the same faces (especially politicians) trying their luck to be the president.

For several FAM officials, they said the nightmare of 2015 haunts them again.

It was the year Tengku Abdullah Ahmad announced his decision to step down as FAM president following Malaysia's humiliating 10-0 defeat to UAE in a World Cup qualifying match.

"It (2015) was a horrible moment ... a dark moment for the association and with Tengku Abdullah saying he wanted to quit, there was plenty of uncertainty.

"We don't want the same thing to happen again. Especially with TMJ having secured sponsorship deals worth millions of ringgit. The sponsors will surely feel uncomfortable with the latest development, " said an official.

Just 10 days short of his one year in office, TMJ has, according to his statement:

- lured in sponsors to help contribute to football in the country and prepared a long term plan for the local football with the co-operation of La Liga.

- fought for broadcasting rights for all competing teams in the M-League to help them manage and strengthen their financial stability. As such, all the teams have received between RM1 million and RM3 million annually, so they do not have to be dependent on (state) government funding.

- The U23, U19 and U16 teams made history when they represented the country in the highest level in Asia.

Is this just TMJ venting his frustration? An emotional outburst?

Will he reconsider his decision to quit?

If he decides to stay, then his fiercest critics will use that against him.

If he decides to go, it's back to square one for FAM.

As I wrote in 2017: "He (Tunku Ismail) is, at the end of the day and given the current circumstances, the best man for the job." 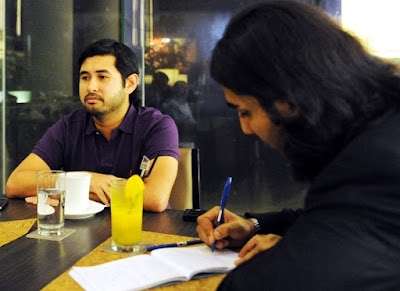