March 09, 2018
April 22, 2018 (11.23am): A press conference was held in Kuala Lumpur on Friday, announcing the fight between Manny Pacquiao and Lucas Matthysse will be held at the Axiata Arena in Kuala Lumpur on July 15.
The press conference was organised by MP (Manny Pacquiao) Production. It is learnt Manila-based MP Production is still looking for a local organiser for the fight.
For the record, Section 36 of the Sports Development Act 1997 states: 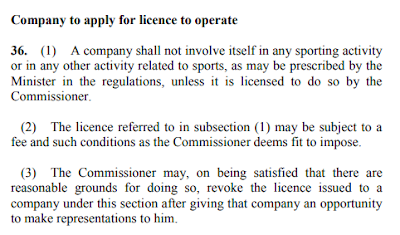 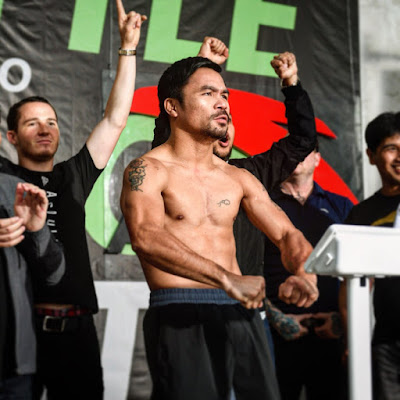 Professional boxer Manny Pacquiao (pic) had on March 7 confirmed his next fight will be on June 24, in Kuala Lumpur, Malaysia.
The Filipino Senator believed his opponent would be World Boxing Association (WBA) (regular) welterweight champion Lucas Matthysse.
Manny was quoted by the Manila Times saying:
"It's already final I'm going to fight in Malaysia on June 24. It is against Matthysse. I'll be ready for the preparation and it's going to be 11 weeks."
Sports Commissioner Datuk Zaiton Othman, however, said her office had yet to receive any application regarding the fight. Zaiton said:
"Yes, I read about it but we have not received any application (from the organisers). Perhaps it's still early since the fight is scheduled in June 24."
According to the Sports Development Act 1997, sporting events in the country must be licensed by the Commissioner.
Observers are intrigued to find out who from Malaysia is luring Manny to fight in Kuala Lumpur.
ESPN's Dan Rafael reported:
1. Eric Gomez, the president of Golden Boy Promotions, which represents Matthysse, said Manny's adviser Michael Koncz had contacted him about a possible Pacquiao-Matthysse fight but that they have not made a deal yet.
2.  Top Rank promoter Bob Arum said the group interested in bringing Manny to fight to Malaysia supposedly would put up US$15 million with US$5 million up front.
"If the money comes up then I've agreed to sign on. We would handle the logistics, we would handle the undercard and we would handle the television.
"All they have to do is say they got the US$5 million of the US$15 million. That makes it legit. [But] I'm not booking my flight [to Malaysia] yet."
Rappler reported that the 39-year-old Manny will be co-promoting the bout after rejecting an offer to fight in Las Vegas on an undercard to his recent conqueror Jeff Horn. Read full report here.
Manny was in Malaysia late last year as the boxer-turned-politician and his delegation paid a visit to the Johor Royal Family.
Johor Southern Tigers, the official Johor Darul Ta'zim football Facebook page that also highlights matters from the palace, had in a Sept 26, 2017 posting said:
"Other than the meeting's objective to strengthen the relationship between the two parties, this is also to discuss an initiation of a boxing match in Johor ..." 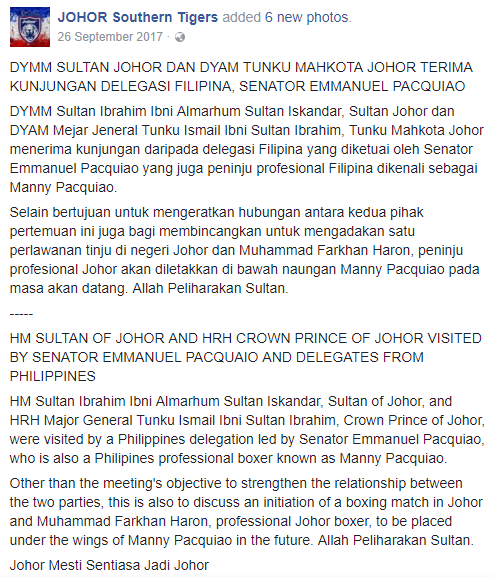 Jaohar Events had late last year announced Manny will fight in The Johor Redemption in Kuala Lumpur. No dates were revealed during the press conference held in Johor Baru on Nov 30, 2017.
Utusan Malaysia had then reported that Manny had visited Johor twice over the past two months and had "formed a special friendship with the Crown Price of Johor" Tunku Ismail Ibrahim. Read the full report here.

Tunku Ismail Ibrahim, fondly referred to as TMJ here, has a strong connection with Argentina - the country where Matthysse is from.