Let’s take a look at some of the sports programmes we have had since the 90s.

At least five were listed on the National Sports Council’s website:

Here are some of the more "popular" programmes:

i.                 Jaya 98
Launched in 1993, the Jaya 98 programme set the tone for numerous sports including diving, gymnastics and weightlifting, allowing them to grow and mould talents who were title contenders.. The architect behind the programme was Datuk Wira Mazlan Ahmad.

This was what The Star’s Rajes Paul wrote in 2006:

TWO heads, they say, are better than one. And that's a maxim that's has been taken to heart in Malaysian sports.

Take, for instance, AsiaComm – a multi-million ringgit plan for the Asian Games and Commonwealth Games.

Australian Damien Kelly is the head of AsiaComm management committee. But Datuk Zolkples Embong has been appointed as the chairman of the committee. Who does what can be quite a puzzle.

Asked to explain why there were two people heading the same unit, National Sports Council (NSC) director general Dr Ramlan Aziz said: “It is not two people heading the unit. Every Monday, I meet up with Damien to know the day-to-day running of the programme. I have appointed my assistant Zolkples (NSC deputy director general) to take over that job.”

While the idea behind the plans are noble – which is to revive the image of the Malaysian sport – the Ministry should pause and review the set-up.
There is a lot of money going to waste. A little house-cleaning could go a long way.
And, like Dr Ramlan said, we need to have people working with the right spirit. Only then can we get the system to work.

iv.             Kita Juara
The programme was aimed at propelling Malaysia to the top of the medal standings at last year's SEA Games in Kuala Lumpur. The national contingent obtained its best ever finish in the regional Games with 145 gold medals.

Let’s look at what Malaysia has achieved (overall ranking in parenthesis) since the birth of the numerous elite programmes funded by tax payers:

1. In reference to my article yesterday, I tweeted: 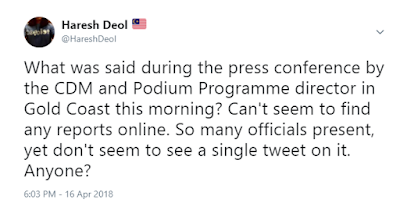 2. Responding to the same article, a reader WhatsApp this message to me:

3. Will the National Sports Council (NSC) take over such elite programmes - and the National Sports Institute (NSI)? For the record, the NSI was a division under the NSC for years. It was only in 2007, the then Youth and Sports Minister Datuk Seri Azalina Othman Said decided to change the functions of NSI which led to the separation of the NSI and NSC.

4. Hey you, yes you. You were once part of the system and you failed to leave a lasting impression. Don't waste time sending messages. Take up singing. It's good for the mind and soul. Try singing Frozen's Let it go.
Jaya 98 Kita Juara Malaysia National Sports Council National Sports Institute Podium Programme Sports