The Selangor Health Department sprung into action yesterday as they raided a clinic in Taman Selayang Jaya following Malay Mail’s expose over the sales of sick leave chits (MC) on Saturday.

The raid also took a twist as the man who had sold the MCs to both our reporters turned out to be the doctor running Klinik Rakyat.
The department’s private medical practice control unit confiscated several exercise books which is believed to have details of those who had bought the MCs and stacks of sick leave chits from the clinic before lodging a police report at the Selayang police station.
Unit director Dr Faizal Mat Arifin, who led the raiding team, said the doctor who operated the clinic, Dr Saidul Islam, had abused his authority in issuing MCs.
“It is a serious case as it breaches the Medical Act. We have interrogated Dr Saidul and taken his statement. We will submit our findings to the Malaysian Medical Council (MMC) for further action,” he said.
“We have also lodged a police report following our raid at Klinik Rakyat.”

Read more in the Sunday Mail. 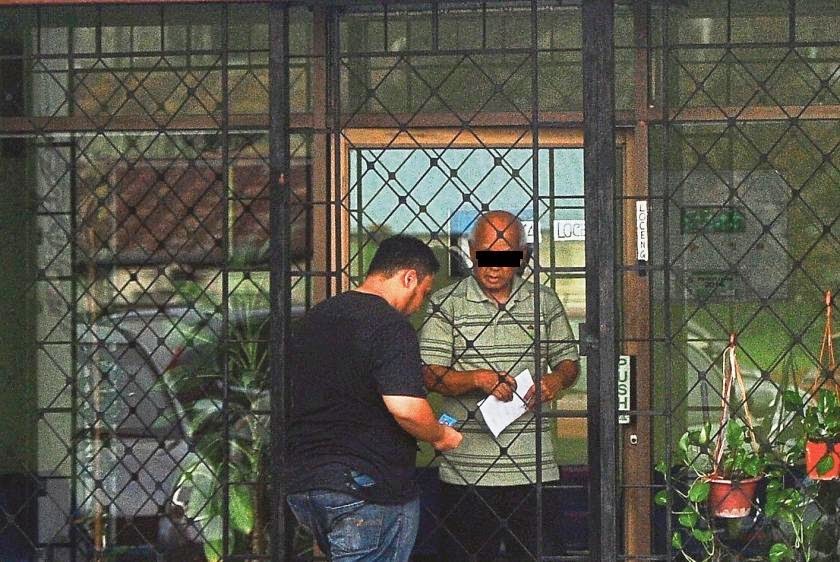 Who would have thought buying sick leave chits, including backdated and postdated ones, would be as easy as buying bus tickets?

Klinik Rakyat in Taman Selayang Jaya near Batu Caves sold two medical chits (MCs) to our reporters without them even entering the premise.

Our visit there followed a tip-off from a reader who claimed the clinic has been dishing out MCs for more than a decade.

The MCs were sold at prices ranging from RM20 to RM40 per day (see price list). “Patients” were even allowed to backdate or postdate their MCs.

Feigning illness, our reporters visited the clinic last week. Although the “Open” sign hung behind the glass door, the grilles were locked. Our reporter rang the doorbell and was attended to by a man who took down his particulars and documented them in an exercise book before issuing the MC.

The whole transaction took place along the corridor of the clinic within minutes.

We sent another reporter to the same clinic days later and he, too, managed to obtain an MC without any hassle. Our reporter was also assured the clinic would answer any queries from his fictitious company.

We called the clinic to obtain confirmation of whether our reporter had visited them.

A lady answered the phone and upon obtaining our reporter’s name and identification number, confirmed his visit.

“Yes, he met the doctor as he had high fever,” she said.

On both occasions, our reporters tried to buy medicine from the counter without prescriptions but were directed to a nearby pharmacy instead.

Both MCs had the same doctor’s name, Dr Saidul Islam, stamped with a signature above it. A quick check showed Dr Saidul and Klinik Rakyat are registered with the Malaysian Medical Council (MMC). Efforts to speak to the doctor, however, proved futile.

A spokesman from the MMC said investigations will be conducted after receiving a complaint from the public.

“If the claims are true, the clinic will be referred to the council’s ethics committee. There, they could be given a warning, a fine or ultimately, have their licence revoked due to unethical code of conduct,” he said.

The subject of MCs being abused was highlighted by Health Minister Datuk Seri Dr S. Subramaniam on May 9. He had then said stern action would be taken against medical practitioners guilty of selling MCs.

“If proven, they can not only be fined but their licences can also be revoked and they can no longer work as doctors in Malaysia,” he said.

Subramaniam also said such unethical practice smears the image of the profession.

The Malaysian Anti-Corruption Commission (MACC), had on its website the following day, issued a statement saying medical practitioners who sell MCs to the public can be referred to the disciplinary committee of the MMC.

The statement, signed off by MACC investigation director commissioner Datuk Mustafar Ali, said that under Section 18 of the MACC Act 2009, anyone who gives receipts, accounts or other documents (including MCs) to his/her principal (superior) with the intention of fooling him/her, and if the principal has reason to believe that the statement in those documents are false, is considered guilty.

“MACC is authorised to investigate these individuals, considering it involves financial and forging elements, and in the process benefiting him or herself,” he said.

“MACC hopes the health ministry and department, or any other party with evidence or proof of this activity, would contact us for immediate action.”

And here are what the reporters have to say:

Described as an “interesting outing”, it was an experience which left our reporters wondering how many people had tricked their employers on the pretext of being sick with fake medical chits (MC).

Klinik Rakyat sold MCs and had no qualms backdating them for a fee as discovered by our reporters recently. They had tried to see the doctor, but were told he was not around. Instead, they were attended to by a man and a woman who issued the MCs at the entrance of the clinic.

Fahirul N. Ramli and Danial Dzulkifly relate their experience. Here is what they have to say:

It was a clinic visit I will never forget.

Pretending to have a bad cough, I visited the clinic only to find it locked. However, the “Open” sign was hanging behind the tinted glass door, so I rang the doorbell.

An elderly woman opened the door and greeted me.

I asked if it was possible to obtain an MC. She asked if I was sick, to which I nodded. She then told me to wait at the entrance while she went back into the clinic.

I managed to peek inside, and it looked like a typical clinic. There was a small counter, although no one was seen manning it at the time.

Several minutes later, a man, in his late 40s, came to the entrance and asked me what I needed.

I told him I needed an MC.

I requested an MC for the following day. He went back into the clinic and returned with an exercise book, requesting my full name, my company's name and the date of the MC.

I then asked if I could buy a bottle of cough syrup.

“No, we do not sell any medicine here. You can get some at the pharmacy over there,” he said, pointing to the left of the clinic.

He passed me the MC and I paid him RM25. He also said he was able to provide backdated MCs but they were only available for seven days and that too only for kes berat which implied serious ailments or visible injuries.

I left baffled, wondering how such a transaction could occur in the clinic's corridor in broad daylight.

Following my colleague's experience in easily obtaining an MC, I decided to try my luck as well.

I visited the heavily grilled clinic at about noon on a weekday and rang the doorbell. An elderly woman, with an old notebook in hand, greeted me with a warm smile and asked: “Do you need an MC?”

I said yes but asked if the MC came with medicine as my employers would question me if I wasn't on medication.

She replied: “No medicine here. We don't sell medicine.”

I asked if the doctor was in and if he or she could prescribe me some medicine.

She insisted the clinic did not have any medicine and suggested I head over to a nearby pharmacy instead.

Sensing that I had asked too many questions, she requested that I return to the clinic later in the evening.

I returned at 4.45pm and this time, was greeted by a man.

He provided me with the rates for the MCs.

He explained that if I required backdated MCs for two days, it would cost me RM80 (RM40 for each day).

I requested an MC to be backdated a day earlier, to which he asked for my full name, my company's name and the date of the MC along with my ailment, which was registered as “high fever”.

He also requested to see my identity card and returned it to me minutes later.

“No! None here. You just get it at the pharmacy. If your office calls, just say the doctor attended to you at 11am and confirmed you had high fever.”

Just like my colleague, I too was amazed how easy it was to purchase an MC without even stepping into the clinic. It was like buying a bus ticket
clinic Doctor mc medical chits Taman Selayang Jaya