Too much football and badminton, athletics takes a back seat

NAREN was excellent in athletics. Having recorded his achievements a decade ago, I believed he would have easily excelled at the national and international levels. 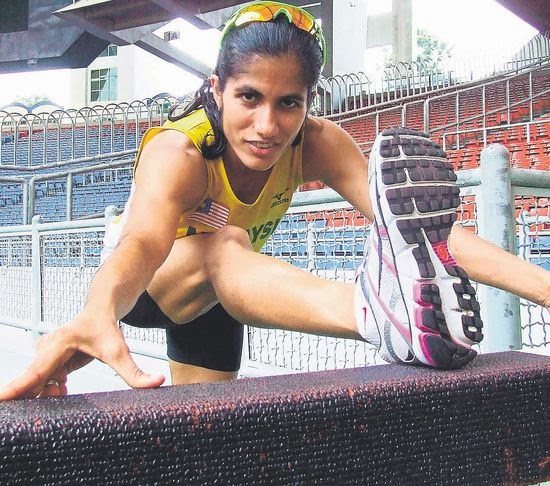 Sadly, the Gombak lad threw away his spikes the minute he left school.

“Cannot-lah bro, someone must work to pay the bills,” he said, when we bumped into each other recently.

“There is no support system. There are many road races and marathons, but not short distance races. It’s difficult. So I decided to work and give up sprinting for good.” Naren is not alone.

While the attention seems to be on the FA of Malaysia’s 50th congress this Sunday and the national shuttlers’ participation in the on-going Thomas Cup in New Delhi, athletics have taken a back seat.

It does not help that the sport is still dominated by records set decades ago.

There is no pipeline for those who leave school, something which even national hurdler Noraseela Khalid agreed.

“I had a friend who was good in athletics in school, but she was forced to quit as she joined the military. There are many like this as there is no support system,” said the four-time SEA Games champion.

“There’s a road race or marathon almost every other week and the money is good. We have running clubs, but perhaps it is time they also concentrate on other aspects of athletics.”

The Penangite, who turns 35 on September 27, also said most who excelled in sports hailed from the outskirts.

“Athletics is the basics before one masters another sport. Athletics is all about jumping, running and throwing … basic motor skills. Sadly, those who live in the city tend to lack such basic skills and get injured easily, even at the highest level, compared to those who come from villages.”

Perhaps athletics has been taken for granted.

There seems to be plenty of attention on who runs Malaysian football, but not the quality of football — from the grassroots to the top level. We harp about past glories in badminton and only rely on Lee Chong Wei to bag the honours.

Yet, we continue to struggle to raise the standard of the other local shuttlers.

Athletics? It is only spoken about when we win or fail miserably at regional games. Period.

“Some may take athletics for granted, but to me athletics is my life. “I have worked so hard to come this far and I am sure this is achievable if one puts the same amount of determination and will power into his or her training regime.”

So who do we blame, Noraseela?

“It is easy to play the blame game but we have to look at ourselves.

We tend to talk a lot but do little to help the sport. If we collectively help out and popularise the sport in the right way, then perhaps we can see a diff erence.”

It is disappointing that athletics, a sport that only requires a good pair of shoes and plenty of running space, is taken lightly by schools and up to the national level.

Not everyone would turn out to be a track star, but if we have more people participating, that would naturally see a larger pool of talents. The same applies to all the other sports.

Children must start from young.

This would in return encourage them to run either at their schools’ sports day, during a weekend road race or to blaze the tracks at the Olympics.

It all starts with the simple act of running.
athletics badminton football Mailsport Noraseela Khalid