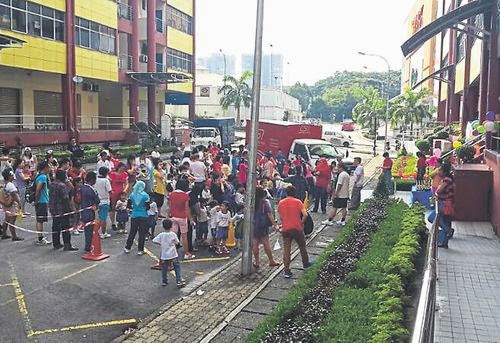 A family walks along a row of shops in Desa Petaling and stops by the roadside. The father points at three parking bays and tells his child: “This is where my kindergarten held its Sports Day 30 years ago.”

I imagine that would be the conversation some of the 50-odd children will have when they grow up.

Last weekend was supposed to be a memorable outing for parents and children of a particular kindergarten in Kuala Lumpur.

Armed with cameras and plenty of enthusiasm, parents were eager to see their children in action, hoping to win a trophy or two during the kindy’s Sports Day.

Instead, it turned out to be a rude shock.

There were no tents, no field and no tracks — nothing to suggest it was a sports day.

There were only several balloons as teachers sought refuge from the sun along the corridor of several shop lots.

Yes, you read that right. The annual event was held on three parking bays along the roadside of a commercial centre! This did not go down well with most of the parents.

“Each child forked out RM25 and yet the sports day was held on a parking lot. Last year it was held in a hall. Why couldn’t they do the same this year?” questioned an irate parent.

“I was looking forward to documenting this moment but now I am so embarrassed to even post any pictures on Facebook.”

Parents were apparently told the venue would be held “within the kindergarten’s compound”.

“This is not within the compound. This is literally by the roadside. Although they closed the road, the children were still open to so many security issues ... from falling on the tarmac to being lured by strangers. Luckily it went well but what if something happened,” another parent added.

The parent added there was nothing sporty about the activities held and it was more of a family day instead.

The management could have rented a school field or hall within the vicinity. If money was an issue, they could have written their request months ahead to Kuala Lumpur City Hall to use either the Titiwangsa, Bandar Seri Permaisuri or Tasik Perdana Lake Gardens. They could have also spoken to the Olympic Council of Malaysia to use the indoor sports complex at Wisma OCM.

Such establishments fail to realise the fundamentals of education is beyond what is taught within the four walls of a classroom.

There’s more to just singing Do Re Mi or colouring a cartoon character.

Sports is a great way to expose our young ones to the meaning of working together, fair play and sportsmanship.

It is one of those moments were children are actually out of their air-condition rooms without any fancy gadget in their hands. Yet, some see it convenient to “rob” children of such an experience.

There is no point emphasising the need for grassroots development when kindergartens are allowed to organise sports in such a manner.

To some it may be a cheap plastic trophy but to the winner it is a sense of achievement.

And for the parents, they will proudly display the trophy in their homes for years, if not decades.

It is only fair to give our children a good environment to mark their success — either on a field or an indoor hall. Let’s keep the parking bays for vehicles, shall we
Children desa petaling kindergarten kuala lumpur sports day