Azizulhasni to mum: Happy birthday, thank you and I love you! 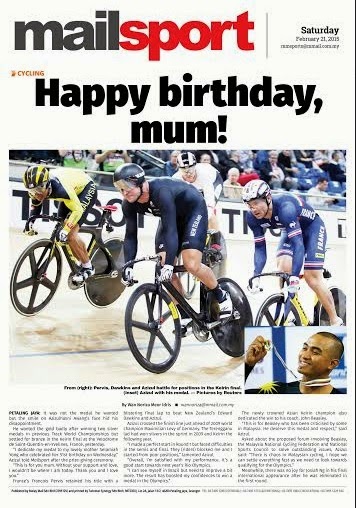 IT was not the medal he wanted but the smile on Azizulhasni Awang’s face hid his disappointment.

He wanted the gold badly after winning two silver medals in previous Track World Championships but settled for bronze in the Keirin final at the Velodrome de Saint-Quentin-en-Yvelines, France, yesterday.

“I dedicate my medal to my lovely mother Selamiah Yong who celebrated her 51st birthday on Wednesday,” Azizul told Mailsport after the prize-giving ceremony.

“This is for you mum. Without your support and love, I wouldn’t be where I am today. Thank you and I love you.”

Azizul crossed the finish line just ahead of 2009 world champion Maximilian Levy of Germany. The Terengganu lad had won silvers in the sprint in 2009 and Keirin the following year.

“I made a perfect start in Round 1 but faced difficulties in the semis and final. They (riders) blocked me and I started from poor positions,” lamented Azizul.

“Overall, I’m satisfied with my performance. It’s a good start towards next year’s Rio Olympics.
“I can see myself in Brazil but need to improve a bit more. The result has boosted my confidences to win a medal in the Olympics.”

The newly crowned Asian Keirin champion also dedicated the win to his coach, John Beasley.
“This is for Beasley who has been criticised by some in Malaysia. He deserve this medal and respect,” said Azizul.

Asked about the proposed forum involving Beasley, the Malaysia National Cycling Federation and National Sports Council to solve outstanding issues, Azizul said: “There is chaos in Malaysian cycling. I hope we can settle everything fast as we need to look towards qualifying for the Olympics.”

Meanwhile, there was no joy for Josiah Ng in his final international appearance after he was eliminated in the first round.
azizulhasni awang cycling track world championships