December 10, 2017
UPDATE (Dec 11; 11.58am): Sporting events approved by Sports Commissioner's Office will be posted on the Youth and Sports Ministry's website starting Dec 14, as revealed by the Sports Commissioner in her statement today. I'm glad the last point of my observation (as per posting right below) has been addressed. 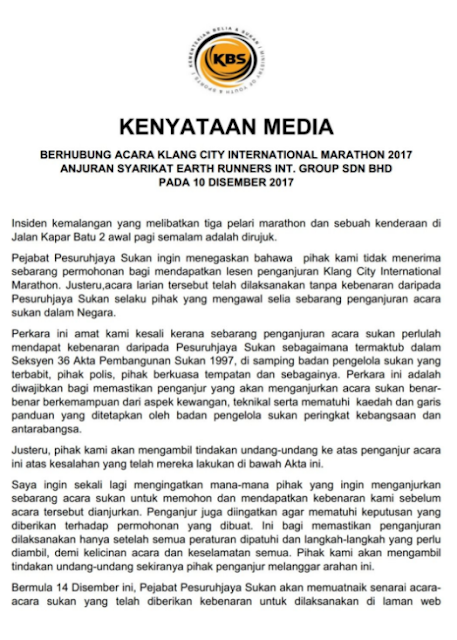 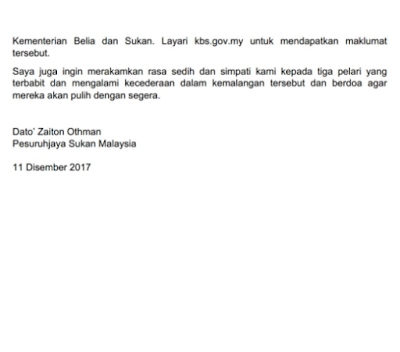 ---
A Klang City International Marathon 2017 pacer suffered serious injuries after she and two others were hit by a car.

Turns out that the organiser of this morning's event, Earth Runners International Group Sdn Bhd, DID NOT submit any application to the Sports Commissioner's Office.

Sports Commissioner Datuk Zaiton Othman, had at 8.48pm clarified, she did not receive any application for this morning's run from the organiser. She described the race as "illegal".

She earlier told this writer her office, had on Nov 14, received an application to host a run in Klang.

"It was in fact the organiser of another run in Klang ... the Klang Heritage Marathon 2017 scheduled next week who had submitted the application  (on Nov 14) but I rejected it.

"The event where three runners were hit this morning ... no, we did not receive any application from the organiser and the organiser will have to face the music," she said.

According to Zaiton, the Klang Heritage Marathon 2017 was rejected because:
a. it is not sanctioned by the national body (Malaysian Athletic Federation).
b. does not have sound financial capabilities.
c. has a bad record of organising previous runs including the Sarawak Marathon, AMMetlife 2017 and the KK Marathon 2017.

The run is apparently supported by police and has an official mineral water partner, as seen in this link. 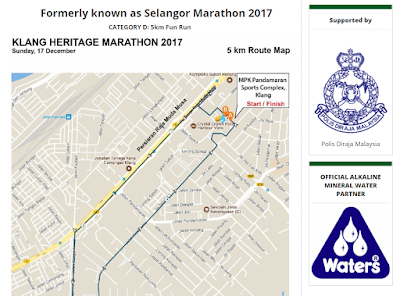 Article 36 to the Sports Development Act 1997 states: "A company shall not involve itself in any sporting activity or activity related to sports- unless it is licensed to do so by the Commissioner."

Prior the second conversation with Zaiton, I had in the afternoon tweeted: 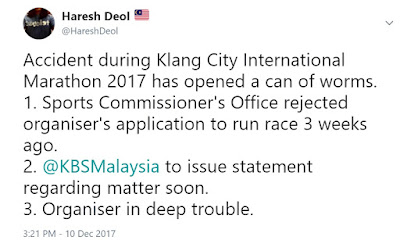 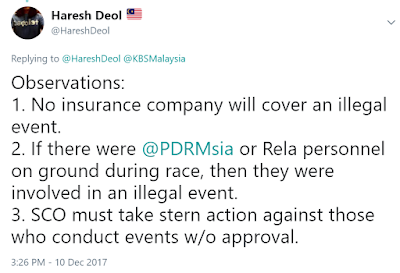 I do hope the powers-that-be take note of the tweets above (especially the second tweet - observations) and not forget about this matter in days to come.
Datuk Zaiton Othman Klang City International Marathon 2017 Malaysia run sports commissioner Sports Commissioner's Office