Masoc "pressured" to get rid of staff? 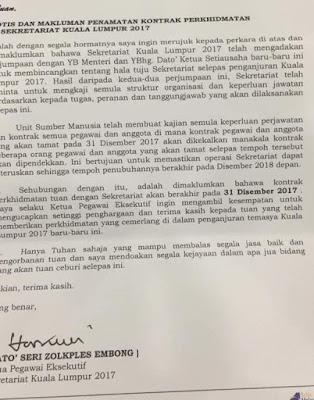 Some 70 out of the close to 160 staff from the Malaysian Organising Committee (Masoc), the organiser of the KL 2017 SEA Games and Asean Para Games, have had their contracts cut short.

The employees were handed their letters on Nov 30 and told to leave by Dec 31, 2017. For the record, the one month termination notice "by either party" is in line with Masoc's contract with their staff.

The decision was made following a meeting between Masoc and the Youth and Sports Ministry recently.

Some of them, with existing contracts that run between 15 months and two years, are wondering on what grounds were they being asked to leave early. They also wished they were given the heads up.

"We are fully aware the one month's (termination) notice is clearly stated in our contracts. We are just wondering how was the list (of those asked to leave early) drawn out," said an insider who refused to be named.

"We learnt some 70 staff are involved in this exercise. We could have been warned in advance so that we can find employment elsewhere."

Another source pointed out all contracts should end on Dec 31, 2017 as "there was no need to extend the stay of any officer."

There are staff seconded from the Youth and Sports Ministry, National Sports Council and national associations.

"Apparently Masoc is pressured to get rid of the staff as it was a financial burden," the source added.

When asked if Masoc has completed the post-Games review, the source said:

"The sport managers (in Masoc) have completed their post-Games reports and some are awaiting for the national associations to go through them before they are certified and stamped. We were told that the Youth and Sports Ministry has done its own post-Games report."

It remains unclear when Masoc or the ministry will reveal the post-Games report.
contracts kl sea games MASOC Youth and Sports Ministry