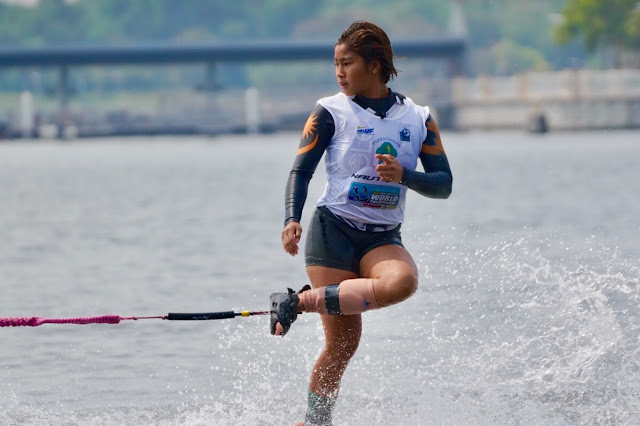 Malaysian waterski darling Aaliyah Yoong Hanifah can certainly stand tall after rounding up the International Waterski and Wakeborard Federation (IWWF) Waterski World Championships on a high.
With nothing to lose, the 16-year-old delivered another outstanding showing in the women’s tricks final to score 7,440 at the Water Sport Complex, Putrajaya today.
The score was better that her achievement of 7,320 in the preliminaries and it is yet another new Asian open women’s tricks record.
She finished ninth following several upsets with American Erika Lang and Canadian Neilly Ross fumbling their runs.
Aaliyah also finished 10th in the women’s overall category with a score of 1,984.63.
“I think it was a pretty good way to finish despite the fact that I fell at the end and I’m lucky that the judges didn’t take away those points from my tricks run,” said Aaliyah who has a personal best of 7,600.
“I’m usually not so consistent with my scores because nerves get to me and I tend to mess up my runs, so to be able to trick over 7,000 points for two days is really amazing and I hope to do it more and be more consistent.
“I’m definitely happy to be in the top 10 for tricks although getting to the podium is still a long way to go. This is after all my first final and there are a few more steps to go so hopefully I’ll be there in the near future."
American Anna Gay reclaimed the gold medal she last won in 2015 scoring 10,530 - a new world championship record.
The silver went to Peru’s Natalia Cuglievan who scored 9,570 while Germany’s Giannina Bonnemann took the bronze with 8,740 points.
Aaliyah added the memorable outing was an added motivation to keep on improving as a three-event skier.
“I definitely hope to be really good in overall but also to keep on improving in tricks as well because that’s still my main event,” said Aaliyah.
“Going forward, I still need to improve on slalom and jump. I did alright in this worlds as I came close to my personal best.
“I am also hoping to continue working on my tricks. The goal next is to start completing all my tricks in the 20-second window and hopefully start scoring over 8,000 points in the future.”
Canada’s Whitney McClintock-Rini grabbed the overall gold with a score of 2,569.21, dethroning three-time overall champion Regina Jaquess of US in the process.
It is McClintock’s second overall gold, following her first triumph at the 2009 world meet in Calgary, Canada.
The silver went to Belarus’ Hanna Straltsova with 2,465.71 while American Brooke Baldwin took the bronze with 2,448.92.
Aaliyah Yoong Hanifah Waterski Waterski World Championships