Ahead of the World Championships 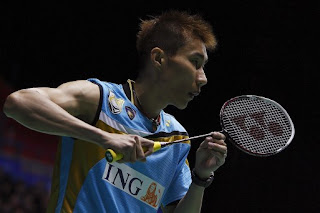 Our shuttlers arrived in Paris ahead of the World Championships which starts next week (Aug 23-29).

On Sunday, some of the finest players around the world - including world No 1 Lee Chong Wei (pic), China's ace Lin Dan and Taufik Hidayat of Indonesia are expected to exchange pleasantries as they meet at the Mercure Hotel Paris (Porte de Saint-Cloud) at 5.30pm (local time).

Below are the list of the Malaysian players in action:

Lee Chong Wei - The World No 1 is eager to justify his position and winning the World Championship for the first time would be an excellent start for his hunt to netting the gold medal at the 2012 London Olympics. The Penangite's best achievement at the World meet coming in third in the 2005 edition in Anaheim, USA.
Nevertheless, Chong Wei has an uphill battle this time around with the likes of Taufik Hidayat, Kenichi Tago and Lin Dan drawn in the same half. Critics believe Chong Wei will falter yet again but he is adamant to prove otherwise. A top four finish is expected.

Hafiz Hashim - In 2003 he was the toast of the nation after bagging the All-England title. Since then it has been downhill for the lanky Kelantanese player. Hafiz is expected to face Chong Wei in round 2 and admits that his focus is towards the Commonwealth Games and Asian Games compared to the World Championships. Nothing much expected from him.

Wong Choong Hann - He remains as the sole Malaysian to make it to the finals of the World Championships (Birmingham, 2003). Expected to meet Sony Dwi Kuncoro in round 3 and if he manages through, could be staring at Peter Gade in the quarter finals. Choong Hann could turn out to be another early casualty for Malaysia.

Wong Mew Choo - Sangat 'kan chiong' (nervous). That's the favourite phrase often uttered by the KL lass. Among her best records was winning the China Open in 2007 and the Super Series Finals in 2009. Been constantly bogged by injuries to her knee, Mew Choo has passed her prime and would make little impact in this year's World Championships - which could very well be her last. Could face Sania Nehwal in the third round - said to be the possible final of the Commonwealth Games in India.

Lydia Cheah Li Ya - Another nervous character before any tournament, according to her former coach Tey Sue Bock. This will be a good experience for Lydia as she enhances her skills to fill in the void that will be left by Mew Choo in the near future. Anything beyond round 2 will be a bonus.

Koo Kien Keat-Tan Boon Heong - I was told that when the duo won the All-England in 2007 and was paraded in Ijok just ahead of the by-election, Kien Keat was supposedly overheard as saying (in Cantonese) : Ijok hai pin tou? (Where is Ijok?). Just like Chong Wei, Kien Keat and Boon Heong are eager to justify their World No 1 ranking but a rather tough draw coupled with their rather inconsistent form during major tournaments could see them crash in round 3 where they could face South Koreans Jung Jae Sung-Lee Yong Dae. Hopefully they could turn the tables and play all the way to the critical stages.

Gan Teik Chai-Tan Bin Shen - The duo are expected to fly on Emirates to Paris where they got the cheapest deal. On a shoe-string budget, this will be their first World Championships together but their route could be cut short by Japanese pair of Hashimoto-Noriyasu Hirata in the second round.

Choong Tan Fook-Lee Wan Wah - They were once the most celebrated duo in Malaysian badminton. It looks like their love affair will be seen for the last time in Paris as Tan Fook will take up a coaching offer in Hong Kong, leaving Wan Wah to scout for a new partner before he hangs up his racquet for good sometime next year. Among their recent wins include the India and Vietnam Opens in 2009 and the Asian Badminton Championship in 2006 and 2007. If all goes well, they could meet second seed Indonesians Markis Kido-Hendra Setiawan in round 3.

Chan Peng Soon-Goh Liu Ying (mixed doubles) - This will be more of a training ground for the duo ahead of the Commonwealth and Asian Games. They could face a tough time against Indian pair V.Diju-Jwala Gutta in round 2 and if they make it - they could face a well rest Polish team of Robert Mateusiak-Nadiezda Kostiucyk in round 3.

HD says: My money on Chong Wei and Peter Gade in the final? Any takers?