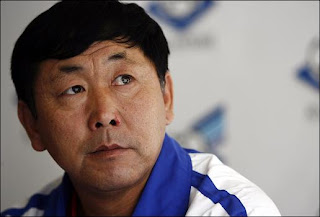 National coach K.Rajagobal must certainly be a relived man.

His counterpart in North Korea, on the other hand, is one unlucky coach. Having lost all three matches at the World Cup, Kim Jong-hun (pic) has been sentenced to 14 hours of hard labour, as reported here.

Apparently, the team were earlier subjected to public abuse by its Sports Minister. Sigh.

And Fifa president Sepp Blatter is now taken to task for his biased actions against the North Koreans. He has yet to say anything on the influence of the Asian government but was quick to take the French and Nigerian governments to task.

HD says: Grow a set of balls Blatter. And politicians (wananbe politicians in Malaysia included) should just keep their mouths shut when it comes to sports.