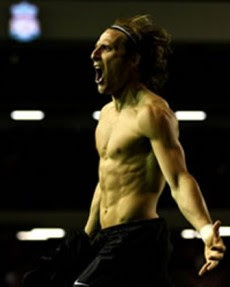 As published in today's Mailsports, several Spanish teams could see action in the region.

While many Liverpool fans are eagerly anticipating banking giants Standard Chartered to bring in their favourite team sometime next year, it remains to be seen if the La Liga would make KL their stop during their Asian Tour next year.

Apparently, observers feel it is wiser for La Liga to concentrate on Bangkok, Singapore, Hong Kong and Japan instead of Malaysia. It seems that the neighboring countries offer a better footing for La Liga's marketing strategy compared to Malaysia. If Diego Forlan (pic) decides to stay put in Atletico Madrid, we could see him in action next year..who knows :)

Special thanks to Les Tan, creator of Red Sports, who reported about the Soccerex Asian Forum held in Singapore recently and sharing his thoughts to Mailsports over the proposed International LFP Cup next year.

HD says: Better start brushing up on my Spanish. Anyone willing to teach? :)