Being Frank: Bad ‘guardians’ take zing out of wonderkid’s feat

MALAYSIA’S newest sporting hero, sprinter Badrul Hisyam Abdul Manap, 18, should be a household name. Sadly, he isn’t so. Certain media don’t even get the spelling of his name right. That’s disappointing. 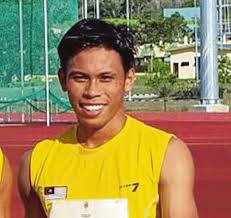 Badrul who clocked 10.29s to break Watson Nyambek’s 17-year national 100m record by one-tenth of a second last Monday is one of the best stories this year. Sadly, his story has not gripped the nation. That’s depressing.

The schoolboy’s spectacular achievement is one of the defining moments of Malaysian athletics, yet it has been virtually ignored by the authorities including the Malaysian Athletics Federation (MAF) that has had a series of poor stories in recent years.

The education and youth and sports ministries also failed to make Badrul, a young inspiring Malaysian, top news. Here’s the thing: at a time when the authorities are struggling to encourage the young to excel in sports, the story of a kid who chased chicken in his kampung in Malacca and renewed Malaysia’s sprinting prowess is a motivational, feel good narrative.

Being the heart of this sprinting rejuvenation, Badrul was part of another golden moment at the Asean Schools Games in Brunei last week when he led the 4x100m quartet of Mohd Haiqal Hanafi, Asnawi Hashim and Khairul Hafiz Jantan to another gold as Malaysia claimed their ninth title in track and field.

While some media missed the record-breaking 100m feat, Malay Mail sports editor Graig Nunis was scrambling for Badrul’s picture after he had chanced on the story. The MAF, operating without a media officer, didn’t have one.

Nunis, with the help of Malay Mail specialist sportswriter, Tony Mariadass, sought the help of SSTMI principal Suhaimi Sun Abdullah who gladly passed on what he had. It made back page lead.
The education and youth and sports ministries, as well as the MAF fluffed the golden opportunity to capitalise on the track wonder who made struggling athletics relevant in 10.29 seconds.
Clearly, it was a walking public relations nightmare. You got to hand it to them: they found a way to give the nation an encore to the disingenuous way they left Badrul’s story by the wayside.
Perhaps, they had no faith in him — even if this was the lad who clocked 20.88s at the Universiti Malaysia Perlis Athletics Open five weeks ago, only for tailwind exceeding 2.0m/s not to be recognised as breaking Tan Sri Dr M. Jegathesan’s record of 20.92s set at the 1968 Mexico City Olympics.

The narrative for the success of athletes is often punctuated by inspirational performances accompanied by wide publicity especially when it involves one, like Badrul, who has all the tools to become an icon of athletics.

It’s our love of sport and an endearing story that bring us all together. We’re united by those little individual passions that ignite sports — and recognise that together we can achieve so much more.
Unless we pass that passion on to the next generation, we’ll never know what kind of talent walks through the doors of our schools day in and day out.

Because every child, in every part of the country, deserves to find that one sport they are really passionate about — and I’m convinced the government and national sports bodies are the ones to turn that national vision into a local reality.

When we talk about heroes, we envision those who are making a mark on the nation, the world, one act at a time.

We should think of ourselves as one big family — celebrating the exemplary behaviour of our everyday heroes.

Acts that display motivation, perseverance and passion deserve recognition, and these are the stories we love to uncover and share. These are the people who arouse our spirit and we are obliged to celebrate them.