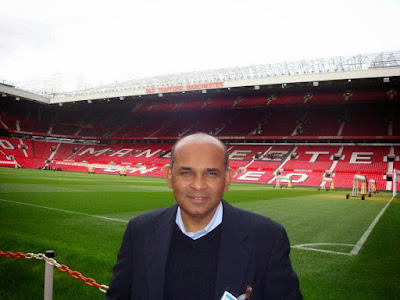 John, who was the deputy general secretary, was made acting general secretary after Datuk Alex Soosay was suspended in May following an internal investigation over a controversial “tamper or hide” video exposed by Malay Mail on April 25. Soosay quit on June 17.

Mailsport had on June 18 quoted insiders as saying John was “most likely” to occupy the hot seat.
He joined a host of Malaysians who served as general secretary, including

Datuk Peter Velappan (1978-2007) and another Kedahan, Datuk Paul Mony Samuel (2007-2009).
“It’s a great honour for the (AFC) executive committee to recognise my capabilities and have faith in me. There are many new things, especially reforms introduced, for us to move forward and I am happy to be part of that,” said John, 54, who was in New Dehli to attend the executive committee meeting.

“But it is sad that my dad is not around to see this. He would have been a proud man.”

John’s father was a former national referee and a former headmaster who last served at SJKT Saraswathy in Sungai Petani. He died in 2002 at the age of 80.

John is no stranger to the local football scene. The former school teacher from Kedah played for the state’s youth team and later turned trainer for Selangor in 1992. He then coached the Selangor President’s Cup team in 1994. He went on to hold various positions in several organisations, including the FA of Malaysia, and the Asean Football Federation before joining Fifa as its development officer in 2001. He had been with AFC since 2012.

AFC president Sheikh Salman Ebrahim Al Khalifah said during the meeting that AFC had seen the recruitment of new, motivated and highly professional executives, which would now be under the permanent direction of the “outstanding” John.

Salman was eager to see AFC move away from the scandals involving his predecessor Mohamed Hammam. In 2011, Fifa banned Hammam from football for life after being found guilty of attempted bribery.

The Qatari was earlier accused of attempting to buy votes ahead of a Fifa presidential election which he was contesting in that same year. Sepp Blatter won the election.

Salman, a member of the Bahrain royal family, is also in the running for the top spot in next year’s Fifa election.

Kuan had, in the explosive video, claimed Soosay had said “protect me” before asking “can you tamper or hide any documents that relate to me?”. The video was recorded by former Fifa investigator Michael J. Pride on July 26, 2012.

John said he is blessed to have a supportive family.

“I’ve already been doing the job (as acting general secretary) and my family has been supportive since day one.

“I’m a football man, something my wife has understood and appreciated even before we got married. She knows when it comes to me, it’s all about football,” he said in jest.