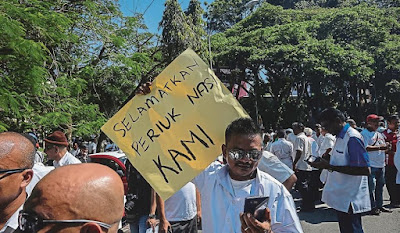 WE sat at the corner of a rather dingy eatery near the former Rothman’s roundabout in Petaling Jaya. It was there that Kumar shared his taxi driving tales over some tomyam.

“It’s not pretty … just like this place,” he said, slurping the spicy dish while stray cats stared at us, hoping for a morsel.

In his mid-30s, Kumar is a frustrated man. He thought he could make an honest living as a taxi driver in Kuala Lumpur.

“But I hardly make anything these days,” he sighed.

Kumar bought a second-hand taxi — a 2010 Proton Saga BLM — from a taxi company in 2013. He paid a down payment of RM2,500 and his “loan” had him paying RM47 daily for two years and five months. The daily payment includes the car loan, driver’s permit fee, installation of a natural gas vehicle (NGV) tank and insurance.

Once he finishes paying the loan, the car will be his. But if he plans to continue driving, Kumar will have to pay RM27 daily as ‘‘rent’’ for a driver’s permit, and an additional RM2 for the NGV tank.

We quickly did the math. Kumar’s second-hand cab will cost him RM41,360. The car will finally be his, but he will only have three options – to sell the car (at a loss), to utilise it as a private car or to continue driving it as a taxi by “renting” the permit from the taxi company.

“It’s expensive. But many are forced to opt for this scheme as they do not have financial means, are blacklisted by banks or do not have a driver’s permit,” he said.

“I wish the permits were given to individuals instead of companies.”

But the government had declared that permits were to be awarded to companies, instead of individuals, to regulate the industry, I pointed out.

“Rubbish. If it is regulated, then why are beat-up taxis still operating? Why aren’t taxi drivers wearing their uniforms instead of just hanging a white shirt on their seats? Why are cabbies ferrying passengers without using meters?”

He said cabbies, who are stationed at the Kelana Jaya LRT station, often charged a flat rate. As such, commuters either cross to the other side of the road to flag a cab or get down at Taman Bahagia LRT station to get a taxi from there.

Malay Mail had on numerous occasions highlighted the deplorable condition of taxis and cabbies who refused to use meters.

“I am contemplating becoming a Uber or Grabcar driver. Less hassle and you actually get more passengers.

“Two years ago, taxis will line up to pick up passengers from condominiums. Today, you will only see a handful. The rest are mostly private vehicles. Grabcar is cheaper than taxis, the drivers drive new cars and just look at the number of drivers on the road,” he said, while showing me the Grabcar application on his smartphone.

Kumar said he was ashamed with the behaviour of some of his peers who were rude and acted like thugs.

He said the industry was getting extremely competitive and has no place for rogue taxi drivers. More drivers are thinking of leaving the trade if the present state of affairs continue.

“It’s also better for me to be a Grabcar driver as I don’t have to worry about inspections, uniforms and I can drive my car out of Klang Valley anytime without requesting permission from the authorities.”

City cabs are only allowed to operate in the Klang Valley.

It came as no surprise that cabbies voiced their displeasure against Grabcar and Uber. Some 500 of them gathered at Padang Merbok on Nov 18, demanding the government take action against ride-sharing services. They also demanded the resignation of Land Public Transport Commission (SPAD) chairman Tan Sri Syed Hamid Albar. The drivers made their way to Parliament and were greeted by opposition MPs who promised to fight their cause.

The drivers are tired of being kicked around like a ball. Klang Valley Taxi Drivers Action Committee president Zailani Isa Usuludinf was quoted as saying SPAD claimed the Malaysian Communications and Multimedia Commission (MCMC) had the power to shut these ride-sharing applications. However, MCMC said it was SPAD which should do it.

The authorities must address this issue by coming down hard on rogue cabbies and injecting some pride and dignity into the industry. Taxi drivers are the nation’s “ambassadors”.

Enforcement, or the lack of it, is the root cause of the issues faced by the industry. As such, rogue cabbies roam the streets, further bruising the industry’s image. We don’t need these thugs as they create a wrong impression about Malaysians. As for ride-sharing services, it is clear there is a lacuna in the regulations. Competition is healthy and must be encouraged, but it should be on a level-playing field — across the board.

If the authorities do not want to rock the boat, then let’s just forget about the taxis and fixing an already ailing industry. Just allow Uber and Grabcar to dominate. It will make life easy for everyone — no regulations, no permits required, no inspections needed — leaving everyone to their own devices.

Just like the filthy eatery that violates every single by-law but still operates daily near the five-foot way where Kumar and I met, no one cares. It has been mere talk thus far.

Here is a plea on behalf of true blue taxi drivers — please help the deserving many. Take a cab and listen to their stories. You will then know why.

HARESH is executive editor of  Malay Mail. He can be reached at haresh@mmail.com.my or on
Twitter @HareshDeol
grabcar Haresh Says SPAD taxi uber