Phew, what a relief!

November 05, 2015
As published in Mailsport today 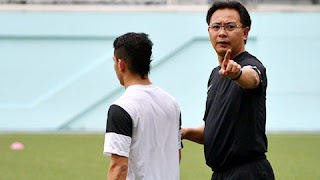 KUALA LUMPUR — It was a sensation Datuk Ong Kim Swee could not describe.

Right after Fifa informed FA of Malaysia (FAM) regarding a switch in the Palestine-Malaysia World Cup qualifying venue, the interim national coach quickly called his family.

Palestine were to host Saudi Arabia in Ramallah today and Malaysia on Nov 12 at the Dura Stadium in Hebron — a city which had been hit by numerous attacks between security forces and Palestinians in recent weeks.

Palestinian FA (PFA) were supposed to “provide Fifa urgently all the details of the chosen neutral ground for the hosting of both matches”.

“My family were relieved. I was relieved as well after (FAM general secretary) Datuk Hamidin Amin broke the news,” he said.

Fifa had yesterday informed PFA the matches against Saudi Arabia and Malaysia must be played on neutral ground.

Fifa said “the Palestinian government confirmed it cannot guarantee the safety and security around the two matches anymore”.

Ong added: “The fear was still there. The players and coaching staff have been monitoring news reports of the tensed situation.

“I was torn between going to Hebron on Friday through Jordan or to only leave for Hebron on Monday. With this latest development, we have to make new plans.”

He hoped the travel arrangements would not be disrupted.

“We still have time on our side, unlike the Saudis who will play Palestine on Monday,” Ong said.
“More importantly, we can now focus on the game.”

The world body had in their letter said the match between Palestine and Saudi Arabia was postponed to Nov 9 while the clash between the war-torn nation and Malaysia remained on Nov 12.

Palestine had been looking forward to hosting both teams.

However, tensions between Israel and Palestine had surged, raising plenty of security fears.

Saudi Arabia Football Federation and FAM had sent several letters to Fifa, appealing for a change in venue, who had insisted the matches would go on as planned.

Mailsport, had on Tuesday, reported FAM wrote to the world body on the same day and received a reply later in the evening, insisting the match would be held in Hebron.

The report also revealed Harimau Malaya’s participation in Hebron was also discussed by the Foreign and Sports Ministries.