HARESH SAYS: We need to secure our stadiums

France hosted Germany in an international friendly in Paris last Friday, as 80,000 fans chanted, took selfies and cheered for their favourite players in action.

But the smiles quickly turned into panic, and for some, tears.

Those at the stands, including French President Francois Hollande, were jolted following terror attacks that hit various parts of the French capital. They later learnt one of the three bombs set off near the arena was supposed to be detonated inside the stadium.

Authorities said an explosion at the terrace would have triggered a deadly stampede.

The death toll of 129 could have increased to thousands. Bodies would be seen all over the field as some of the best footballers in the world would have also been killed.

Those in the stadium have one man to thank — an unidentified security personnel.

Security guard Zouheir, who was initially presumed to be the hero, said one of his colleagues turned the terrorist away after frisking the suspect. The attacker, who bought a ticket and tried to enter 15 minutes after the kick-off, instead detonated the vest outside the stadium. 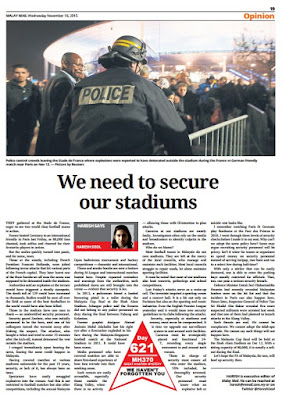 I cringed immediately upon hearing the news, fearing the same could happen in Malaysia.

Having covered matches at various stadiums nationwide for the past 15 years, security, or lack of it, has always been an issue.

Spectators have easily smuggled explosives into the venues. And this is not restricted to football matches but also other competitions, including the annual Malaysia Open badminton tournament and hockey competitions — domestic and international.

Flares and smoke bombs are now a feature during M-League and international matches hosted here. Despite repeated reminders and warnings from the authorities, such prohibited items are still brought into the venue — evident that security is lax.

In 2013, a policeman found a loaded Browning pistol in a toilet during the Malaysia Cup final at the Shah Alam Stadium. Selangor police said the firearm did not belong to any police personnel on duty during the final between Pahang and Kelantan.

Former graphic designer Ahmad Jazimin Mohd Jalaludin lost his right eye after a firecracker exploded in his face during the Malaysia-Singapore football match at the National Stadium in 2011. It could have been worse.

Media personnel who have covered matches are able to share first-hand experience of how fans intrude into their working areas. Such venues are easily accessible, especially those outside the Klang Valley, when there is no activity — allowing those with ill-intention to plan attacks.

Cameras at our stadiums are mostly faulty. Investigators often rely on the media and broadcasters to identify culprits in the
stadium.

Most football teams in Malaysia do not own stadiums. They are left at the mercy of the local councils, who manage and maintain such facilities. Most local councils struggle to repair roads, let alone maintain sporting facilities.

It must be noted that most of our stadiums also host concerts, gatherings and school competitions.

Last Friday’s attacks serve as a wake-up call. The terrorists targeted a sporting venue and a concert hall. It is a hit not only on Parisians but also on the sporting and music industries. Even the English Premier League yesterday said it would issue new security guidelines to its clubs following the attacks.

Security, especially at stadiums and venues, must never be compromised. It is time we upgrade our surveillance system in and around such facilities.

Cameras must be strategically placed and functional 24-7, recording every single movement in and around such venues.

Those in charge of security must ensure all who enter the stadium, VIPs included, be thoroughly screened.

Our security personnel must know what an explosive belt or suicide vest looks like.

I remember watching Paris St Germain play Bordeaux at the Parc des Princes in 2010. I went through three levels of security checks before I made it to my seat.

With only a sticker that can be easily doctored, one is able to enter the parking bays usually restricted for officials. That, too, can pose a serious security breach.

Defence Minister Datuk Seri Hishamuddin Hussein had recently revealed Malaysian leaders were on the hit list and that the incident in Paris can also happen here. Hours later, Inspector-General of Police Tan Sri Khalid Abu Bakar revealed five more suspected militants were arrested last week and that one of them had planned to launch attacks in the Klang Valley.

Such threats are real. We cannot be complacent. We cannot adopt the tidak-apa attitude. We cannot say such things will not happen here.

The Malaysia Cup final will be held at the Shah Alam Stadium on Dec 12. With a sitting capacity of 80,000, it is usually a sellout during the final.

Let’s hope the FA of Malaysia, for one, will beef up security then.