February 11, 2016
As published in Mailsport today

“We have informed all teams and clubs they must only have one official contract recognised by FAM. To offer two contracts to the same player is illegal,” said FAM general-secretary Datuk Hamidin Amin.

“This cannot and must not be condoned.”

Hamidin also chided the Professional Footballers Association of Malaysia (PFAM) after their chief executive officer Izham Ismail, had on Tuesday said it is not illegal to sign two contracts with one team. Izham said this after revealing 21 players, mostly from Armed Forces, had not been paid wages amounting to RM4.3 million and teams made their players sign two contracts to pay lower income tax, Employees Provident Fund (EPF) and Social Security Organisation (Socso) contributions.

PFAM president Hairuddin Omar admitted he knew about footballers being offered two contracts since he started playing 15 years ago. Hamidin, however, said FAM were in the dark about such practice “up until recently”.

“The status committee will meet tomorrow (today) to discuss the salary woes faced by the Armed Forces players.

“All these under table dealings must end. Under declaring one’s income is against the law,” said Hamidin.

He said players were also responsible for the fiasco.

“They should never negotiate such deals with the teams to earn more while compromising their income tax, EPF and  Socso contributions.”

Armed Forces, once dubbed the big spenders in the M-League, failed to pay 15 of their players for six months last season, amounting to RM3.7 million. Kelantan failed to settle the salaries of five players totalling RM447,000 while Felda owed Mohd Azrul Ahmad RM220,000.

PFAM had presented the Armed Forces players’ case to the status committee in August. On Dec 14, the committee decided the Forces must pay their players by Dec 31. PFAM alerted FAM on Jan 7 after the club failed to settle the salaries of the players leading to the press conference on Tuesday. 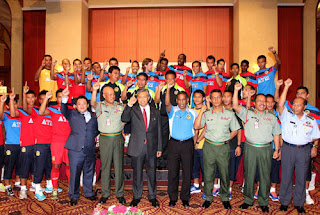 PETALING JAYA — Armed Forces, under fire for not paying their players’ wages amounting to RM3.7 million, admitted the club had drawn up dual contracts for players to avoid paying hefty EPF and Socso contributions.

Forces defended the move, saying it was “for the sake of the players” and that the club had no money.
“The players wanted it that way … they wanted to avoid paying extra for these contributions. So we offered two contracts,” said a top official from the club who declined to be named.

“Yes, we did not pay the full contributions but we only wanted to help them. The players would naturally want more money and such deals mean more paperwork for us.”

However, Armed Forces goalkeeper Syed Adney Syed Hussein had on Tuesday claimed he had insisted for one contract but the club rejected it.

The official claimed Forces had “overspent in the past” and failed to keep tabs on their expenditure.

“The club paid the players in advance and even hired a public relations company. These were the contributing factors. We'll need time to raise funds,” he said.

“We only have RM5,000 in our account. We'll eventually pay the players but can only do so once we receive money from sponsors. Even if they (players) take us to court, we can’t do anything as we do not have the resources.”

The official said the club was prepared to face the consequences following their actions.

“We know we're at fault and will face the consequences. We learnt our lesson and will only have one contract for the players after this,” he added.

He said the Forces have been given until Feb 22 before they meet lawyers from PFAM who are representing the 15 Armed Forces players.

“We're doing our best to get the money. I hope the players can be patient for a while longer,” he said.
armed forces FAM football Hamidin Amin M-League Malaysia