HARESH SAYS: We can’t seem to live without foreigners 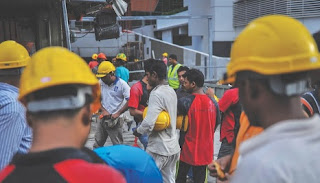 HIS voice broke the buzzing sound of the tattoo gun.

“So what’s this deal of up to 1.5 million Bangladeshis entering the country?” he asked.

Before his customer could reply, the tattoo artist said: “Well, the government will have to bring them in. It’s not like you want to work in some estate or plantation right?”

“True” his customer replied, and the buzzing continued.

This was among the many conversations heard at a tattoo parlour over the weekend. In fact, the idea of parachuting foreigners into the country has been the talking point after it was revealed a Memorandum of Understanding between Malaysia and Bangladesh will be signed within a month to bring in more Bangladeshi workers, men and women, to work in the service, manufacturing and construction sectors.

Jokes circulating via Whatsapp are aplenty. A picture of an airplane with what appears to be Bangladeshis sitting on top of it has made its rounds. Others have expressed concern about the emergence of ‘Dhaka dolls’, with the possibility of Bangladeshi women ending up as sex workers.

Critics poked fun at the initiative to provide opportunities to foreign workers without permits or documents. They say only in Malaysia one can enter illegally and be accorded legal status overnight.
They are claims these Bangladeshis will end up as Malaysians. Perhaps that was the same fear the locals then had when some of our forefathers were brought to the country to serve the mining or rubber industries or to help the British army maintain security.

Bangladeshis, while appreciating the opportunity, are not overjoyed. Their local dailies have warned of exploitation and raised other concerns. Many foreigners are lured to this country by unscrupulous agents who promise them the sky and the moon only to end up with a raw deal. Those who have worked here shared their horror tales to their loved ones back home.

Why the need of “importing” manpower when the government should instead legalise the millions of undocumented foreigners in the country, the critics ask. The number of illegals remains a mystery, with some estimating between two and four million of various nationalities living in Malaysia. There are some 600,000 documented Bangladeshi workers in the country, although many others claim the figure is higher.

And yet we still need more foreigners?

Let’s take a step back and look around us. The man who paints your house is an Indonesian, the plumber who fixes your tap is a Bangladeshi, the maid who cleans your house is a Sri Lankan, the waitress who takes down your order at the restaurant is a Filipino, the salesman manning your stall is from Myanmar, the security personnel guarding your house is a Nepali and the cook who makes your roti canai hails from India.

There are generally no Malaysians in those trades and we only have ourselves to blame. These foreigners are willing to be part of the dirty, dangerous and difficult industries – dubbed as the 3D.
Ironically, Malaysians do not mind washing dishes or cleaning houses in a foreign land as the money, as they say, is good.

Universiti Sains Malaysia Prof Abdul Rashid Abdul Aziz, had in his 2001 journal “Bangladeshi Migrant Workers in Malaysia’s Construction Sector”  wrote: “From approximately 500,000 foreign workers in 1984, their numbers shot up beyond 1.2 million in 1991 and 2.4 million in early 1998. Labour voids manifested particularly during the high-growth period of 1988-1997 were the main inducing agent.

“Construction was among the sectors which came to rely heavily on foreign workers owing to a confluence of factors: Malaysian youth’s aversion to low-status work, an expanding manufacturing sector offering much better employment conditions, labour attrition, widening opportunities for tertiary education, a lower birth rate and the emigration of Malaysian workers to high-wage countries such as Japan and Singapore.”

The same factors, especially of our youth’s disinclination towards menial work, exist till today.
Kluang MP Liew Chin Tong suggested a change of policy would decrease our dependency on foriegn workers. He had in a statement yesterday concerning the construction industry said: “The idea is when houses are prefabricated using precast concrete, one doesn’t need to lay it brick by brick. Half of the construction work will happen in factories and be transported to the sites. Both require higher skills than just unskilled labour.”

Now that is a smart way to approach the issue.

A good friend who migrated to Australia told me during his recent visit to Kuala Lumpur: “In Australia, you will see a doctor, a plumber and a miner sitting on the same table as all three speak enthusiastically about their jobs and share their expertise. They are all treated with respect and dignity … no one is judged by the car he drives or the house he lives in.”

Perhaps that is Malaysia’s biggest woe – perception. We tend to believe certain industries are just disgusting, too much of work and not worth the risk that many of us just overlook such opportunities hoping to make millions by doing practically nothing.

We look down upon those who replace taps and change a new power socket without realising these are simple jobs our parents used to do on their own with ease.

We then instill fear into others by claiming this country will be taken over by foreigners when it is us who cannot seem to live without them.

Obviously, someone will make a cut by bringing these blue collared workers into the country but what is more worrying is that we do not seem to have a clue of the number and status of foreigners in the country. This poses a host of problems — in maintaining security and peace and to ensure there is no outbreak of diseases.

Malaysians must take charge and look at the opportunities around us. We must also start treating each other with respect and dignity. No occupation is greater than the other. Even a small screw in a car plays a vital role in keeping the vehicle going — as such every job is important to ensure the ecosystem of our society is balanced.

And those who enter Malaysia must understand, appreciate and respect the rules of the country.

So do we need more foreign labourers in Malaysia? If you start picking up that wrench or screw driver and you are willing to get your hands dirty — then perhaps not.