February 19, 2016
As published in Mailsport today 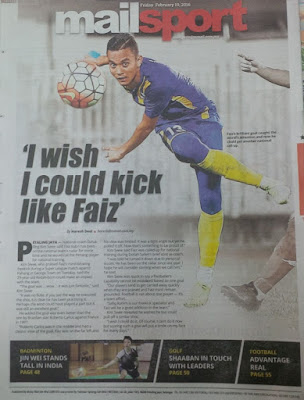 PETALING JAYA — National coach Datuk Ong Kim Swee said Faiz Subri has been on the national team’s radar for some time and he would call the Penang player for national training.

Kim Swee, who praised Faiz’s mind-blowing freekick during a Super League match against Pahang in George Town on Tuesday, said the 29-year-old Kedah-born could make an impact with the team.

“It was no fluke. If you see the way he executed the shot, it is clear he has been practising it. Perhaps the wind could have played a part but it was still an excellent goal.”

He added the goal was even better than the one by Brazilian star Roberto Carlos against France in 1997.

“Roberto Carlos was in the middle and had a clearer view of the goal. Faiz was on the far left and his view was limited. It was a tight angle but yet he pulled it off. Now that’s something to be proud of.”

“I was told he turned it down due to personal issues. He has been on the radar since last year. I hope he will consider coming when we call him,” he said.

Kim Swee was quick to say a footballer’s capability cannot be evaluated based on one goal.

“Our players tend to get carried away quickly when they are praised and Faiz must remain grounded. Football is not about one player — it’s a team effort.

“Safiq Rahim is our freekick specialist and Faiz will be a good addition to the team.”

Kim Swee revealed he wished he too could pull off a similar shot.

“I wish I could do it. Of course, I can’t do it now but scoring such a goal will put a smile on my face for many days.”
faiz subri football free kick goal Malaysia Ong Kim Swee penang