HARESH SAYS: When runners are forgotten and rowdy bikers rule 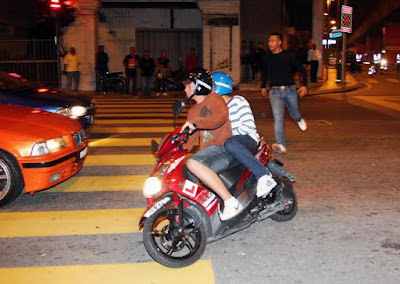 RUNNING has been an integral part of mankind's activities for centuries. Men ran to hunt for food while an organised long distance race was first documented as early as 690BC in Egypt.

King Taharka mooted and laid down the rules for soldiers to run a 100km race which started in the area between Sakkara Pyramid and Faiyum Oasis before ending at Hawara Pyramid in Faiyum. It was a race where even King Taharka participated, to show his keen interest in the event.

Running was part of the ancient Olympics which started in 776BC and the marathon has been featured in every Olympic Games since the inaugural modern Olympics in 1896.

Marathons, half-marathons and 10km runs have been enjoying a strong following in Malaysia in recent years, attracting thousands of local and foreign participants. Last season saw a running competition held nationwide practically every other weekend. From the look of things, this year will be no different.

But marathon, 10,000m and 3,000m steeplechase are among the events missing from the provisional list of the 2017 SEA Games which Malaysia will play host, as revealed by Mailsport on Saturday.
This was after the Olympic Council of Malaysia (OCM) had announced the provisional list of 34 sports for the regional Games last Wednesday. Even canoeing, fencing, bodybuilding and judo were left out.

Youth and Sports Minister Khairy Jamaluddin claimed he was unaware the sports were dropped. This shocked OCM president Tunku Imran Tuanku Ja’afar, who said the minister had okayed the list.

Prime Minister Datuk Seri Najib Razak is the adviser of the SEA Games organising committee while Khairy and Tunku Imran are the chairman and deputy chairman respectively.

Word has it that an official from the committee had blasted a message to representatives of the national sports associations telling them not to attend OCM’s event last Wednesday as apparently the committee members were already at loggerheads over the list of events.

The fact that marathon and the 10,000m were omitted from the list showed how we disrespected the simplest form of athletics that have been part and parcel of multi-sport Games for centuries.

Some claim the events were dropped as Malaysia does not stand a chance to win medals. As former national athlete C. Sathasivam Sitheravellu rightfully pointed out in his commentary published in Mailsport over the weekend: “Almost every week there are half and full marathons across our country. Where are
these runners?”

Just because we don’t have a shot at gold in these events, how can we deprive athletes from other nations from shining? Can we use the same analogy in examinations since Malaysian children generally struggle to master Science and Mathematics. Should we drop these subjects?

If we are weak in a particular subject or field, we must find ways to improvise and the same applies in sports. Here is where the Malaysian Athletics Federation, the guardian of athletics in the country, must step in and ensure its state affiliates produce talents at every age-group in all events.

There are others who said money, or lack of it, was an issue. Who would have thought organising a running event would be more expensive than ice hockey, ice skating, equestrian and sailing? I’m sure the SEA Games Federation, who is organising a two-day meeting that ends today at the posh Mandarin Oriental Hotel in Kuala Lumpur, will be able to spare some funds.

The SEA Games is no longer just about co-operating, understanding and strengthening ties between Asean countries. For many athletes in the region, it is the highest form of competition. Not many athletes from Southeast Asia graduate to the Asian Games, Commonwealth Games and Olympics, let alone stand on the podium of such major multi-sport events.

This would not have happened if we had sports in our minds and hearts.

No to runners, yes to rowdy bikers?

Here we have a bunch of noisy, rowdy motorcyclists who terrorise our roads with their silly stunts and often placing their lives and the lives of other motorists at risk. Many call them mat rempit or mat moto. I don’t like that term as it seems to inject a sense of “coolness”. They are just rowdy bikers.

Leaving office close to midnight almost every night, I often see motorcyclists revving their machines along the Jalan Sultan Ismail-Jalan Raja Laut junction and Jalan Tuanku Abdul Rahman. Some of them use the KL-Ampang Elevated Highways as a circuit.

Talks are now underway to provide designated areas and time for these motorcyclists to gather and “hone their racing skills freely” without affecting the public and other motorists. Sigh!

“We will be able to allow them to have it their way but in a controlled environment because we realise this is entertainment for them,” Federal Territories Minister Datuk Seri Tengku Adnan Tengku Mansor was quoted as saying on Monday.

Sorry sir, but I completely disagree and I believe the police will be on the same page with me. Laws are not meant to be broken. Motorists and motorcyclists must pay the price if they fail to toe the line.

Instead of instilling respect and discipline, we are kowtowing to the rowdy and undisciplined. If these motorcyclists are serious in honing their skills and not to show off their latest modified exhaust, then they should enrol in a proper programme and race at a circuit. Perhaps this is where the ministry can help.

But this is not the thrill they seek. Spend time with them and you would know it is all about the adrenaline rush of weaving through traffic and the ego of being quick on the streets.

Here is a country that axes running events but mulls to provide a racing venue for rowdy motorcyclists to hone their skills. Haven’t we got our priorities wrong? You tell me.

HARESH is executive editor of Malay Mail. He can be reached at haresh@mmail.com.my and on Twitter @HareshDeol