By Haresh Deol and May Robertson
mmnews@mmail.com.my

KUALA LUMPUR — Athletics is in danger of being airbrushed from the 2017 SEA Games
if Malaysia stands firm in dropping five traditional events.

Ariyamongkol said this matter was raised during the two-day 84th Asian AA meeting in Doha on Feb 17 and 18. 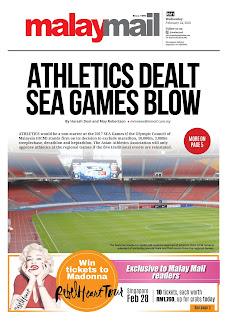 “Representatives from several Southeast Asian nations spoke to (Asian AA secretary) Maurice Nicholas about the matter and he was unhappy the events were not considered.

“He told us the Asian AA will not approve the SEA Games athletics calendar if the organisers went ahead with the reduced list of events.

“The organisers cannot simply drop those races. They must adhere to the rules of the International Association of Athletics Federations.

“If this was being done to ensure Malaysia topped the overall medal tally, then tell your minister of sports that such a move will never develop athletes and you (Malaysia) will never win medals,” said Ariyamongkol.

Malay Mail had last Saturday revealed the five events were not included in the provisional list of 34 sports announced by the Olympic Council of Malaysia (OCM) last Wednesday.

Khairy however told Malay Mail yesterday OCM was told not to make public the list until revisions were made.
Malaysian Athletics Federation (MAF) president Datuk Karim Ibrahim said several regional athletics leaders had met him during the Doha meeting to voice their concern.

“Thailand, Indonesia, the Philippines, Singapore, Myanmar and Laos were disgruntled and even said they would not send their athletics team if we were to drop the events,” he said.

“Maurice is aware of the situation and the organisers must obtain the approval from the Asian AA. Otherwise, it will be meaningless for the athletes to compete as records broken will not be recognised.”

He said the some nations could respond by boycotting the triple jump, discus and high jump in which Malaysia expects gold.

On why MAF did not object to the list before the announcement, Karim said: “Four senior MAF officials and I met OCM officials in January for what was supposed to be a budget meeting. Instead, we were caught off-guard when they told us they had to drop several events to help Malaysia win more gold medals.

“I objected to it and even wrote to OCM to voice our displeasure. We cannot drop track and field events especially since they are Olympic events. It is unfair for those who have trained hard for the Games.”

Tunku Imran told Malay Mail on the sidelines of the ongoing SEA Games Federation meeting in Kuala Lumpur yesterday: “The status (of the provisional list) has not changed. Nothing can change before the meeting tomorrow (today), as that will determine everything.”