An app for trying tattoos before you ink 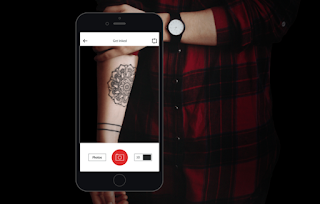 If you’ve been procrastinating about getting a tattoo here’s a neat little AR app, called InkHunter, that’s aiming to help you decide what and where to ink without having to regret that snarling wolf facial tat after the fact, reported Tech Crunch.
The app includes a selection of designs by different tattoo artists that you can try out virtually via the automagic of smartphone-powered augmented reality placing pixels on your flesh in real-time.
You can also upload your own sketches to the app to see whether your pen skills are sharp enough to merit leaving a permanent mark on your person.
In a neat touch, the app asks you to put a little ink on your skin — think of that as part of the try before you buy process — because you need to draw a flat-lined emoji-style face (called Square Smile) on your person in the place where you’re considering the real deal.
Then the AR tech uses your phone’s camera, combined with your three ink marks, to position and overlay what might be your future tattoo. So you’re peeking through your smartphone screen at an alternative tattooed you. Which is about as useful as AR gets right now.
Read more here.
AR app Ink Hunter tattoo tech crunch