Now US Air Force to review its tattoo policy 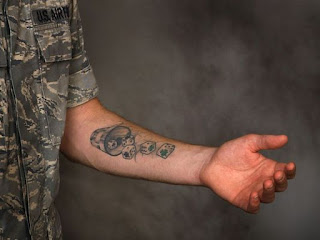 Like its sister services, the US Air Force is getting in line to update its tattoo policy in the next few months.
"The Air Force has recently formed a working group to review the tattoo policy," Air Force spokeswoman Capt. Brooke Brzozowske told Air Force Times on Tuesday.
"Depending on the working group's findings, we anticipate any policy change proposals to be ready for Air Force leadership consideration in the fall of 2016."
Brzozowske did not say specifically what senior leadership is looking to change, but that its been in discussion for some time.
The news comes just a week after the Navy overhauled its tattoo policy, allowing sailors to sport neck tattoos, sleeves and even markings behind their ears, the most lenient policy of any military service.
Read more on Air Force Times.
policy tattoo us air force