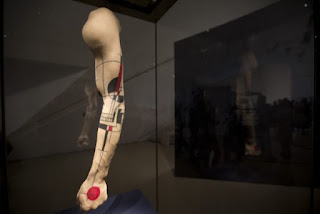 Do you think of tattoos as a vulgar modern affectation?
A new exhibit at the Royal Ontario Museum will demonstrate that it’s an ancient tradition going back at least 5,000 years and probably longer, and one shared by societies around the globe.
“(The exhibition) is a bit of a departure for the ROM. Whenever I mention the exhibition to friends, the first response is usually, ‘At the ROM?’” said Chris Darling, the museum’s senior curator of entomology and co-curator of Tattoos: Ritual. Identity. Obsession. Art. It runs from April 2 to Sept. 5, reported the Toronto Star.
“This exhibition will allow visitors to explore the ancient origins of tattooing . . . and the cultural exchanges that have made tattooing a vibrant art form and the global phenomenon that we see today,” Darling added, noting one survey in 2008 found 40 per cent of respondents between 25 to 29 had at least one tattoo.
“If you have a tattoo, whether you know it or not, you are part of a long trajectory going back thousands of years,” added Ken Lister, assistant curator of anthropology.
Read more about the exhibition here.
Caption: The exhibit includes works of tattoo art on silicone body parts, like this one by Montreal tattoo artist Yann Black, and explores tattoos' 5,000-year history. - Picture by Keith Beaty/Toronto Star
history Royal Ontario Museum tattoo Toronto Star