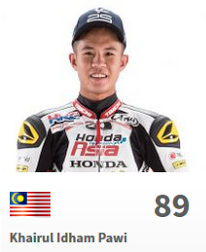 PASIR SALAK — Who would have thought a teenager who spent the majority of his growing years in the slow-paced, rural town of Kampung Gajah could one day make history in motorcycle’s premier racing world?

Khairul Idham Pawi is the country’s latest sporting sensation after becoming the first Malaysian to win a Moto3 race of the Argentina Grand Prix at the Termas de Rio Hondo circuit on Sunday.
He clocked a sensational 41:35.452s to finish more than 26 seconds quicker than Spaniard Jorge Navarro and South African Brad Binder.
The 17-year-old racing sensation, born to Pawi Omar and Hasnah Sulaiman on Sept 20 1998, showed keen interest for two wheels when he was 12.
“At that time he told me he wanted to become a motorcycle racer. I was surprised and told him becoming one wasn’t easy. It required a lot of money and was  dangerous.
“But Khairul was never afraid of riding fast. He was passionate about motorcycles since young,” said his father at their family home in Kampung Gajah yesterday.
When the teenager kept pestering him for a motorcycle, Pawi relented and bought Khairul his first machine — a 110cc bike which was later modified into a cub prix bike.
The racing stars were indeed aligned for the fresh-faced boy who did not have to go far to hone his motorcycle skills as the Datuk Sagor Racing Circuit — a 1.32km-long circuit built in 1999 by then Perak Menteri Besar Datuk Seri Ramli Ngah Talib — was just a kilometre from his home.
“He fell down and fractured his right wrist on the first day of training but it did not stop him. Three weeks later he was back at the circuit,” said Pawi of Khairul, the third of four siblings.
After winning several local tournaments at the circuit, Pawi sent Khairul to the Honda Motor Racing Development Programme at University Utara Malaysia in Sintok, Kedah in 2012 and his career took off as fast as his racing instincts.
Khairul bagged several titles including the Malaysian Cub Prix Wira Championship and Asia Dream Cup in 2014.
Pawi, who is an oil palm dealer was delighted with his son’s historic feat at the Argentina GP and hoped Khairul would build on this success to make his mark in Moto3.
“He has made not only the family proud, but also the Kampung Gajah town. Everyone has been congratulating me after his win.
“Who would have thought Kampung Gajah would be on people’s lips because of my son? I am happy with his victory,” he said, adding that Khairul called the family before the race.
The teenager’s close friend Muhammad Ariff Adam Hamdan, 17, who is also a racer, said: “He was passionate about racing since young. We used to race with our bicycles near our house when we were young and it was fun.
“But now he has become a well-known racer. The entire town knows his name. The kids are looking up to him and now want to become like him.”
He added his friend has a signature move when racing: “He can take a corner without dropping gears, it’s simply amazing!”
argentina cub prix kampung gajah khairul idham pawi moto3 Perak