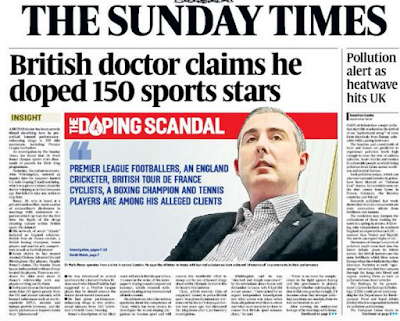 John Whittingdale has called for an urgent investigation into the British anti-doping watchdog’s response to allegations a doctor had prescribed banned performance-enhancing drugs to a sportsman, reported the Irish Times.

The Culture, Media and Sport Secretary said he was “shocked and deeply concerned” by reports in The Sunday Times that the doctor, named by the newspaper as Dr Mark Bonar, had been secretly filmed allegedly discussing working with numerous professional athletes who used banned treatments.

London-based Dr Bonar denied the allegations when they were put to him by the newspaper and said he had not breached rules laid out by the General Medical Council (GMC).

According to The Sunday Times, UK Anti-Doping (UKAD), the publicly-funded watchdog, was given “evidence” of the activities two years ago but failed to take action.

UKAD officials confirmed they received information from the sportsman, however the body said the doctor fell outside their jurisdiction and they did not believe there were grounds to refer the case to the GMC.

Mr Whittingdale said: “Sports fans are entitled to be sure that what they are watching is true and fair with all athletes competing on a level playing field. Once again, I am grateful to the excellent investigative journalism by The Sunday Times for bringing these apparent abuses to light.

“I have asked for there to be an urgent independent investigation into what action was taken when these allegations were first received and what more needs to be done to ensure that British sport remains clean.

Meanwhile, Arsenal said they were "extremely disappointed" by the publication of the claims, "which are without foundation".

Chelsea said the claims are "false and entirely without foundation" while leaders Leicester also denied them, reported BBC.

The FA issued a statement that read:“The FA is fully committed to maintaining the integrity of English football and will work with UKAD and other relevant agencies in seeking to do so."
doping dr mark bonar football premier league Sunday Times UK