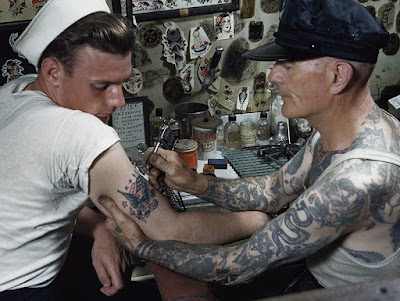 The Navy is easing its tattoo policy in a bid to recruit and retain more sailors from the millennial generation, of whom more than 1 in 3 sport body art, reported the Navy Times.
Sailors will be allowed to have neck tattoos, sleeves and even markings behind their ears under the new policy, the most lenient of any military service. Only their heads are off limits under the new policy, which the Navy's top sailor has called a reality check on the permanent art favored by sailors.
“We just got to the point where we realized we needed to be honest with ourselves and put something in place that was going to reflect the realities of our country and the needs of our Navy,” Master Chief Petty Officer of the Navy (AW/NAC) Mike Stevens said in a March 30 interview. “We need to make sure that we’re not missing any opportunities to recruit and retain the best and the brightest because of our policies.”
The new rules, announced Thursday and taking effect April 30, will allow sailors to:
The rules do not change the Navy’s content guidelines that apply to body art “anywhere on the body,” the policy says.
The NAVY TIMES has got the full story here.
navy times tattoo us navy