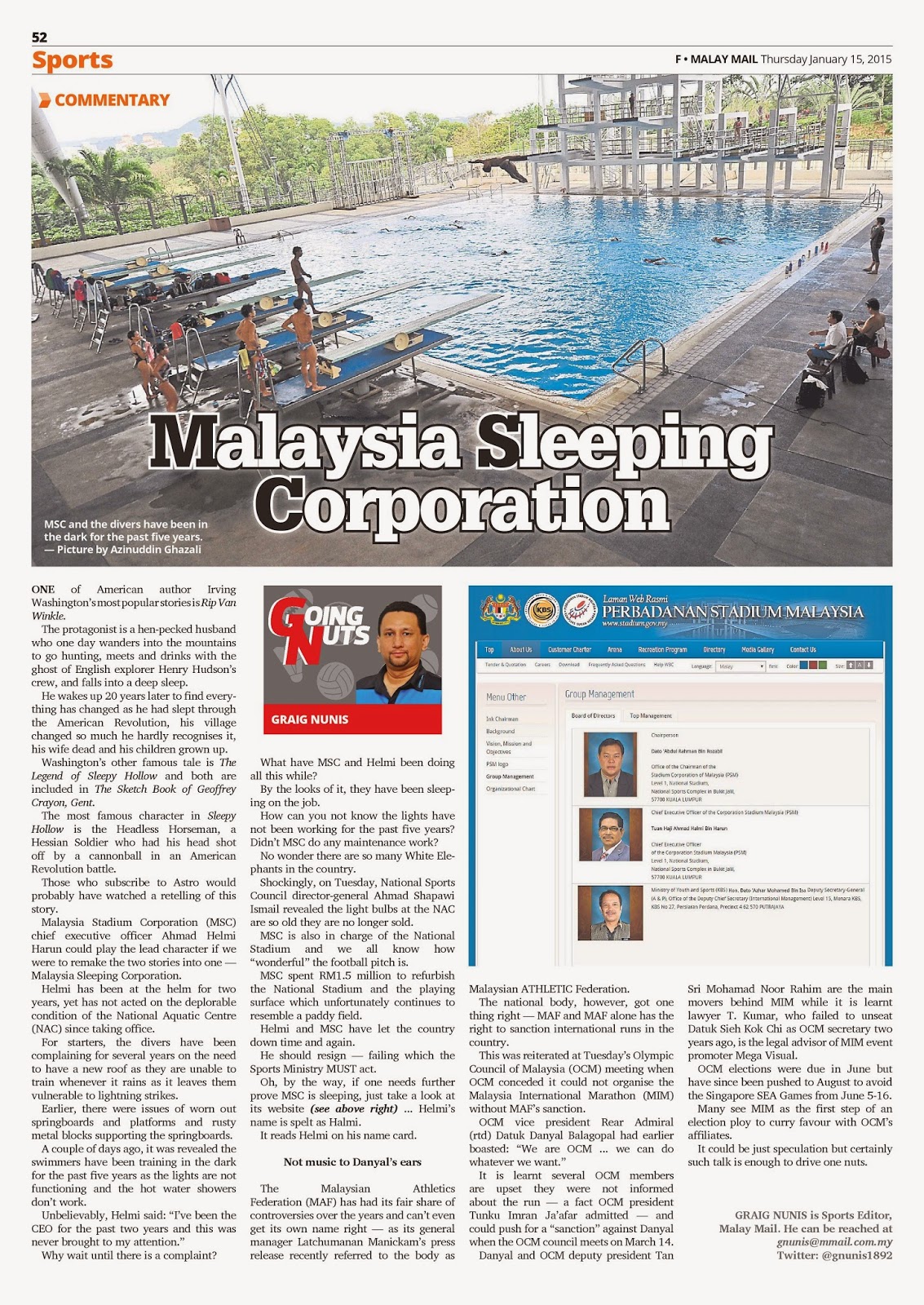 ONE of American author Irving Washington’s most popular stories is Rip Van  Winkle.

The protagonist is a hen-pecked husband who one day wanders into the mountains to go hunting, meets and drinks with the ghost of English explorer Henry Hudson’s crew, and falls into a deep sleep.
He wakes up 20 years later to find everything has changed as he had slept through the American Revolution, his village changed so much he hardly recognises it, his wife dead and his children grown up.

Washington’s other famous tale is The Legend of Sleepy Hollow and both are  included in The Sketch Book of Geoffrey Crayon, Gent.

The most famous character in Sleepy Hollow is the Headless Horseman, a  Hessian Soldier who had his head shot off by a cannonball in an American Revolution battle.

Those who subscribe to Astro would probably have watched a retelling of this story.

Malaysia Stadium Corporation (MSC) chief executive officer Ahmad Helmi  Harun could play the lead character if we were to remake the two stories into one —  Malaysia Sleeping Corporation.
Helmi has been at the helm for two years, yet has not acted on the deplorable condition of the National Aquatic Centre (NAC) since taking office.

For starters, the divers have been  complaining for several years on the need to have a new roof as they are unable to train whenever it rains as it leaves them  vulnerable to lightning strikes.

Earlier, there were issues of worn out springboards and platforms and rusty metal blocks supporting the springboards.

A couple of days ago, it was revealed the swimmers have been training in the dark for the past five years as the lights are not functioning and the hot water showers don’t work.

Unbelievably, Helmi said: “I’ve been the CEO for the past two years and this was never brought to my attention.”

Why wait until there is a complaint?

What have MSC and Helmi been doing all this while? By the looks of it, they have been sleeping on the job.

How can you not know the lights have not been working for the past five years?

Didn’t MSC do any maintenance work? No wonder there are so many White Elephants in the country.

Shockingly, on Tuesday, National Sports Council director-general Ahmad Shapawi Ismail revealed the light bulbs at the NAC are so old they are no longer sold.

MSC is also in charge of the National  Stadium and we all know how  “wonderful” the football pitch is.

MSC spent RM1.5 million to refurbish the National Stadium and the playing  surface which unfortunately continues to resemble a paddy field.

Helmi and MSC have let the country down time and again. He should resign — failing which the Sports Ministry MUST act.

Oh, by the way, if one needs further prove MSC is sleeping, just take a look at its website (see above right)... Helmi’s name is spelt as Halmi.

It reads Helmi on his name card.

Not music to Danyal’s ears

The Malaysian Athletics  Federation (MAF) has had its fair share of  controversies over the years and can’t even get its own name right — as its general manager Latchumanan Manickam’s press release recently referred to the body as Malaysian ATHLETIC Federation.

The national body, however, got one thing right — MAF and MAF alone has the right to sanction international runs in the country.

This was reiterated at Tuesday’s Olympic Council of Malaysia (OCM) meeting when OCM conceded it could not organise the Malaysia International Marathon (MIM) without MAF’s sanction.

OCM vice president Rear Admiral (rtd) Datuk Danyal Balagopal had earlier  boasted: “We are OCM ... we can do  whatever we want.”

It is learnt several OCM members are upset they were not informed  about the run — a fact OCM president Tunku Imran Ja’afar admitted — and could push for a “sanction” against Danyal when the OCM council meets on March 14.

Danyal and OCM deputy president Tan Sri Mohamad Noor Rahim are the main movers behind MIM while it is learnt  lawyer T. Kumar, who failed to unseat  Datuk Sieh Kok Chi as OCM secretary two years ago, is the legal advisor of MIM event promoter MegaVisual.

OCM elections were due in June but have since been pushed to August to avoid the Singapore SEA Games from June 5-16. Many see MIM as the first step of an election ploy to curry favour with OCM’s affiliates. It could be just speculation but certainly such talk is enough to drive one nuts.