Shooting incident could be linked to sports, say insiders 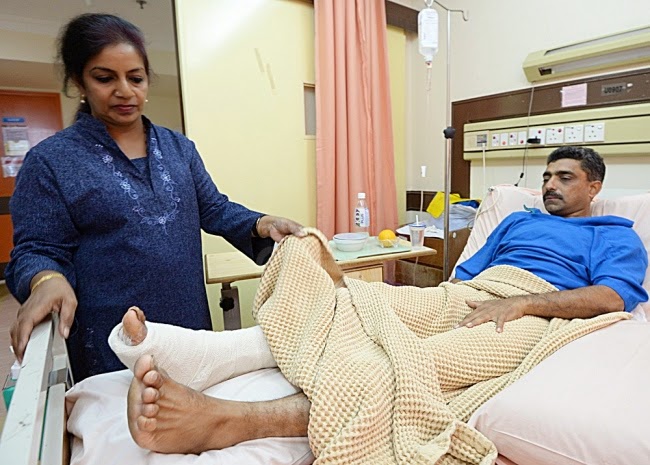 Insiders claim Noorul has been at odds with several officials since 2012 after he secured a position in the Johor Amateur Athletics Association, which eventually gave him a ticket to contest in the MAF elections last month.

Noorul survived a drive-by shooting in front of his house in Bandar Rahman Putra, Sungai Buloh, on Wednesday after two men on a red motorcycle fired several shots at him. He was shot twice in his right leg during the 10pm incident.

He said police are investigating all angles to trace the assailants.

A source revealed MAF president Datuk Karim Ibrahim and Noorul received a death note demanding both of them to step down from the national body.

“The note also mentioned a former athlete and that the issue involving her should not be brought up. If they did not comply, acid will be splashed on Karim’s and Noorul’s faces and they will be killed,” the source said.

“The duo, however, did not lodge a report as Karim was unwell while Noorul was busy managing flood-relief efforts in the east coast.”

Noorul had, in fact, met Karim and several other officials for a meeting on the night prior the incident, the source said.

“If connected, it is sad that shooting culture is now creeping into sports.”

Another insider said several complaints were lodged since 2012 requesting the Sports Commissioner’s Office to investigate Noorul’s legitimacy in holding a post in the Johor association.

The matter was revisited again in 2013 but the Sports Commissioner found everything was in order.

“Police reports were lodged as well. It was really complicated. I hope the shooting has nothing to do with the whole power-struggle between those involved.

“If it does, then this is a bleak day for Malaysian sports.”

Noorul, when met at University Malaya Medical Centre, said he just arrived home when he heard a loud explosion.

“I thought there were fireworks and when I looked back, I saw two men on a motorcycle shooting at me.”
Noorul immediately entered his car and realised he was shot in the leg.

He confirmed having received the death threat which was addressed to him and Karim.

Initial investigations revealed the two men, whose identities were yet to be ascertained, went to the front of the victim’s house on a motorcycle before one of them fired several shots.
athletics karim ibrahim noorul ariffin shooting Sports