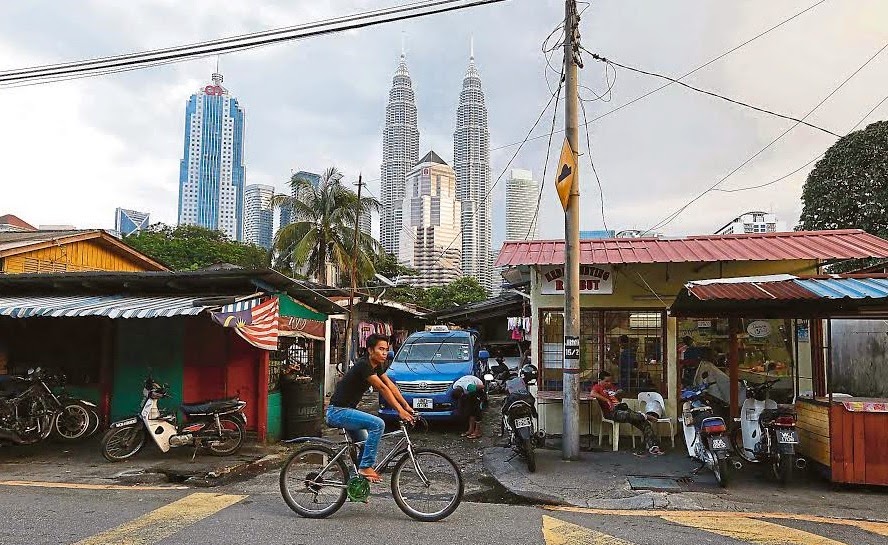 SITTING, standing or hanging on to dear life at the entrance to a sardine-packed minibus was once dubbed a “ride of your lifetime”. It challenged every sense.
You had to contend with discarded chewing gum on the railing, sit on a stained seat and endure fumes and body odour.
For just 60 sen then, the adrenaline rush when riding the minibus was better than the rides at Starlight Express’ indoor theme park on the top floor of The Mall in Jalan Putra, where the first Yaohan store opened in 1987.
That was Kuala Lumpur in the 80s, when everyone claimed they had been in a BMW (fondly known as Bas Mini Wilayah); when Opel Gemini black and yellow taxis ruled the roads and Menara Maybank was the tallest building in town.
Kuala Lumpur has transformed from a small tin mining town in 1857 to a bustling world class city. The capital city’s history remains.
As JM Gullick penned in his book Old Kuala Lumpur first published in 1994: “The tracks which ran from it (the meeting point of the Gombak and Klang rivers) to the mines are to this day preserved in the line of Jalan Ampang, Jalan Pudu, Jalan Petaling … the modern passer-by who goes along these roads can be sure that he follows the weary footsteps of heavily laden porters of 130 years ago.”
The city has seen rapid economic growth since 1880 when British Resident of Selangor JG Davidson relocated Selangor’s capital from Klang to Kuala Lumpur. In 1896, it served as the capital for the Federated Malay States and remained the administrative centre until the country achieved independence in 1957.
The Royal Selangor Club, established in 1884, was one of Asia’s oldest sporting institutions. The nearby Sultan Abdul Samad Building housed government offices.
Among the noted personalities who lived in Kuala Lumpur were K. Thamboosamy Pillai — a man who made his name through tin mining. There were also the likes of Chinese Kapitan Yap Ah Loy, Yap Ah Shak, Yap Kwan Seng and Loke Chow Kit, a prominent tin miner-turned-municipal councillor during the early years of Kuala Lumpur. Chow Kit Road was named after him.
The city has seen several dark moments — from the racial riots in 1969 to the great floods in the 1920s and 1970s.
I still remember the chants of reformasi in 1998, when traders pulled down their shutters while policemen ordered those near Central Market to disperse as thousands of Opposition Leader Datuk Seri Anwar Ibrahim’s sympathisers took to the streets.
In 2009, I was commissioned to interview several noted individuals for Royal Selangor Club’s 125th year anniversary coffee table book. I heard some classic tales first-hand.
Recalling the 1971 floods, the late Tan Sri Lim Phaik Gan (P.G. Lim), Malaysia’s first woman ambassador and Cambridge-trained lawyer related: “I was at a night club called Arthur’s Café at Mountain Hotel. I parked my car in the basement and was unaware of the downpour outside. When I left the club at about 2am, I only saw the roof of my Volkswagen.”
Seventeen days before the city was inundated, the Royal Selangor Club was razed. It took 50 firemen to control the fire in the 10.30pm incident on Dec 20, 1970.
Tan Sri Dr Abdul “Coco” Majid Ismail, a warm man with a fun personality, remembers the incident like it was yesterday.
“My wife and I were invited for dinner with the Sultan of Selangor at the palace in Klang. We ended our meal early and decided to drop by the Selangor Club. We were near the clock tower when we saw this red ball of fire.
“I looked at my wife and said — there goes our dance floor!” he exclaimed.
Many of us, who grew up in Kuala Lumpur, have plenty to tell. And this weekend is indeed a significant day. It was on Feb 1 in 1972 that Kuala Lumpur was bestowed city status and declared Federal Territory exactly two years later.
We have the best food — from roadside eateries to fancy cafes. We have plenty of malls, too many actually. We have beautiful structures, from the likes of the Sultan Abdul Samad Building to the Twin Towers and Federal Territory Mosque at Jalan Duta. We have modern facilities, although they could be better maintained.
There were some memorable tunes dedicated to the nation’s capital. Let’s not forget Datuk Siti Nurhaliza’s version of Kuala Lumpur, Alleycats’s Senyumlah Kuala Lumpur, Sudirman’s Chow Kit Road!, Poetic Ammo’s Kuala Lumpur and Altimet (featuring Noh Hujan) singing Kotarayaku.
Yet, Kuala Lumpur is far behind the likes of New York, London and Tokyo. It remains to be seen if Kuala Lumpur will actually be a developed city come 2020.
Filthy eateries mushroom at almost every corner while stalls, mostly unlicensed, operate freely along walkways. Pothole-riddled roads, clogged drains and occasional flash floods disrupt businesses and traffic.
The city is not really handicap-friendly.
Prices of homes continue to escalate as the gap between the rich and poor widens. Security is a main concern while children are deprived of open spaces. Public fields continue to diminish in the name
of development.
We need to cater to all levels of society — from the average KLite who enjoys a night out at Dataran Merdeka to the affluent who embraces art pieces in galleries.
We must respect Kuala Lumpur and it starts with our attitude. We need to turn it into a cosy city, a cosmopolitan melting pot that offers plenty of experiences. It should be a safe city where our children can run freely. We must push for more open spaces and we need to think green.
Local authorities need to inject fresh ideas to ensure efficiency in their daily operations.
But it boils down to you and me.
We must make Kuala Lumpur, a city with soul and character, better.
Despite your shortcomings, I still love you Kuala Lumpur. Selamat Hari Wilayah Persekutuan.