Are we all not from God, so why fight?

THE Abrahimic religions — Judaism, Christianity and Islam — teach that we are all descendents of Adam. All major religions teach that we originate from the Creator, a Supreme Being.
While the message of oneness of human beings is what religions teach, politics, prejudice and calculative evil people with vested interests manipulate the diversity of culture and ethnicity to cause division and suspicion.
These evil people are like vultures who want to feed on the carcass of innocent lives that may arise in a bloody conflict fuelled by racism.
Let there be no doubt at all. Racism is evil and anti-God. It is anti-God because it denies the greatness of God’s creativity of diverse ethnicity, languages, culture and colours (Quran 49:13).
The purpose of the diversity of ethnicity, explains the Quran, is to learn from each another and to recognise it as yet another sign of God (Quran 30:22).
Hence, it is completely a lie and disgraceful when anyone attempts to justify racism on grounds of God’s teaching.
The recent Low Yat incident is scary not simply because of the potential national harm that could have ensued had the police not stepped in but also due to the nature of justification that some people publicly give for its occurrence!
The so-called “justifications” expose a variety of things that are wrong with our society and require immediate addressing to prevent its recurrence in the future. 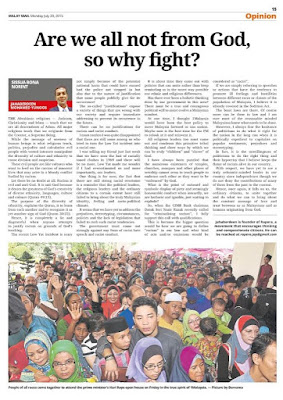 There can be no justifications for racism and racist conduct.
I must confess I was quite disappointed that there are still some among us who tried to turn the Low Yat incident into a racial one.
I was telling my friend just last week that we have seen the last of racially toned clashes in 1969 and there will be no more. Low Yat made me wonder if I had overestimated us and more importantly, our leaders.
One thing is for sure; the fact that there are still strong racial overtones is a reminder that the political leaders, the religious leaders and the ordinary citizens to a certain extent have still failed to bring about the truly Malaysian identity, feeling and socio-political climate.
It seems that we have yet to address the prejudices, stereotyping, circumstances, policies and the lack of legislation that failed to curb such racist tendencies.
The government must come out strongly against any form of racist hate speech and racist conduct.
It is about time they come out with policies that can unite rather than keep reminding us in the worst way possible our ethnic and religious differences.
Has there ever been a holistic thinking done by our government in this area? There must be a true and courageous political will to assist evolve a Malaysian mindset.
At one time, I thought 1Malaysia would have been the best policy to move Malaysia forward as one nation. Maybe now is the best time for the PM to relook at it and reinvent it.
All religious leaders too must come out and condemn this primitive tribal thinking and show ways by which we can be truly “children” and “slaves” of God.
I have always been puzzled that the numerous existences of temples, churches, mosques and other places of worship cannot seem to teach people to embrace each other as they want to be “embraced” by God.
What is the point of outward and symbolic display of piety and seemingly honourable conduct when inwardly, we are barbaric and ignoble, just waiting to explode?
So, when the CIMB Bank chairman Datuk Seri Nazir Razak recently called for “criminalising racism”, I fully support this call with qualifications.
This is because the bigger question would be how we are going to define “racism” in our law and what kind of acts and/or omissions would be considered as “racist”.
If we are simply referring to speeches or actions that have the tendency to promote ill feelings and hostilities between different races or classes of the population of Malaysia, I believe it is already covered in the Sedition Act.
The basic laws are there. Of course more can be done in law and I am sure most of the reasonable minded Malaysians know what needs to be done.
However, I always fear the hesitance of politicians to do what it right for the nation in the long run when it is politically expedient to capitalise on popular sentiments, prejudices and stereotyping.
In fact, it is the unwillingness of politicians to do the right thing and their hypocrisy that I believe keeps the flame of racism alive in our country.
With respect, we have yet to see a truly reformist-minded leader in our country since independence though we do not deny the contributions of many of them from the past to the current.
Hence, once again, it falls on us, the ordinary citizens, to unite together and do what we can to bring about the constant message of love and trust between us as Malaysians and as humans originating from God.

Jahaberdeen is founder of Rapera, a movement that encourages thinking and compassionate citizens. He can be reached at rapera.jay@gmail.com
Jahaberdeen Mohamed Yunoos low yat Malay Mail racism