July 12, 2015
The article below appeared on the backpage of Sunday Mail. The words in red are strictly my views. 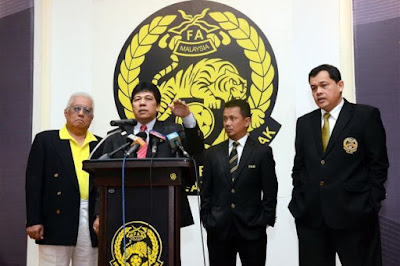 This comes despite president Tengku Abdullah Shah pledging to the exco, via a letter read by general-secretary Datuk Hamidin Amin, he would step down if Malaysia fail to qualify for the 2019 Asian Cup.

This is what The Star's K. Rajan wrote in his article today: "He has pulled off a similar stunt before. Tengku Abdullah had resigned as FAM deputy president in 2007 after the national team crashed out from the group stage of the 2007 Asian Cup – without a single win. Three years later, in 2010, he was back in FAM as deputy president again. Last year, he became the supremo. So, will he quit if Malaysia falter this time – as promised?"

Mathematically speaking, only 58.82 per cent turned up. I guess that translates into a C in school.

To make matters worse, answers at the press conference that followed were nothing short of a farce, giving rise to even more questions — a worrying sign considering Malaysia’s continuous slide on the Fifa world rankings to No 168 at present.

“The president had to attend an AFC meeting,” said deputy-president Datuk Seri Afandi Hamzah, but stopped short of explaining about of the rest.

Erm, AFC plan their meetings in advance. I'm sure FAM would have known about it - giving the fact its president will be attending the meeting?

It was learnt Yusoff is with the futsal team in New Zealand as team manager, Zainol is performing umrah and Ah Chai had a medical emergency.

Afandi was dumbfounded as to why the meeting was scheduled despite knowing AFC’s exco meeting was on the same day in Bahrain and some of its officials were not able to attend.

At a time when Malaysian football is in the doldrums and sinking without trace in the world rankings, the national body failed to convince critics that long-standing problems would be addressed for the better.

It shouldn't be "would be addressed". The problems MUST BE ADDRESSED!

The national body announced plans to set up a task force to look into the national team’s performance after pathetic displays of late. However, details of the task force and its direction would only be sorted out after Aidilfitri.

Malaysia were held 1-1 by Timor Leste and thrashed 6-0 by Palestine in the 2018 World Cup/2019 Asian Cup qualifiers at the National Stadium in Bukit Jalil last month.
Malu, malu.

NOTE: Observers and fans are frustrated as the guardians of Malaysian football are perceived to take their tasks lightly. Meetings are scheduled in advance and it is paramount the president and key members attend to ensure decisions are made in a bid to move forward. Typically, these officials will be defensive in justifying their absence. They must be on the ball and answer all queries thoroughly from the stakeholders. This is not the FA of Kg Sungai Siput. This is the FA of Malaysia.
Pic above is by Bernama