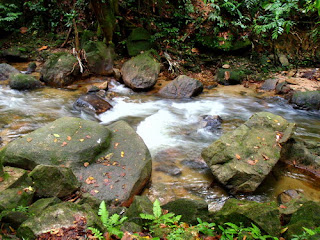 I ENJOY my daily walks with my Golden Retriever. It’s the best time of the day where I get to unwind and enjoy the cool midnight breeze.

Occasionally my neighbour Mr Wong will join me. The retiree has plenty of exciting tales to share.
Our conversations mostly revolve around politics and the nation’s economy. But lately, it has been about the hunger to build highways in Selangor.

“Many say highways are good as it will ease traffic but it is a temporary measure. The population in the area will eventually increase and so would the number of vehicles on the road. And then what ... we build another highway on the highway?” questioned Wong.

I share his sentiments, as highlighted in my previous column ‘Highways no more than cosmetic effect’ on Oct 15 last year. I had then said we must study our transportation system thoroughly and this includes providing quality public transportation service that connects every part of town. Building highways may help ease the situation to a certain extent, but there must be balance and we must be mindful of our ecosystem and surroundings.

Once again the subject of highways surfaces.

While the residents in Petaling Jaya continue to rejoice the cancellation of the controversial Kinrara-Damansara Expressway (Kidex) in February, folks in Ampang and Selangor in general ponder over the Sungai Besi-Ulu Klang Elevated Expressway (Suke) and East Klang Valley Expressway (EKVE).
The Suke will see residents relocated while traders expect a drop in sales once the highway runs along their shops. Mother Nature will not be pleased about the EKVE because it will cut into the Ampang forest and Bukit Belacan — a forgotten retreat.

It is evident Ampang Jaya Municipal Council, often complaining it is the poorest among its counterparts in the Klang Valley, has ignored Bukit Belacan. It is not maintained and no one keeps an eye on visitors who continue to pollute the green lung. Rubbish is seen in various spots while the concrete slabs are broken and left unattended, hazardous for the handful of children who have fun in the river during the weekends.

Bukit Belacan can be as popular as Templer’s Park, Sungai Gabai or Sungai Congkak, if treated right. But no one ever listens.

Thus it will come as no surprise the calls by environmentalists will fall on deaf ears as the Selangor government had approved the EKVE project last month.

Ironically, the approval seems to go against Selangor Menteri Besar Azmin Ali’s pledge earlier this year of not allowing development to harm the environment.

Treat Every Environment Special (TrEES) was quoted as saying: “We are still questioning how the state and federal governments are pushing this project forward.

“(On June 29) news was published on yet another eminent dry spell and likely water shortage. How is (the Ampang forest reserve) no longer needed for water catchment if water shortage is looming again?”

Derek Fernandez, a legal eagle who is an expert in local government law and a former Petaling Jaya City Council councillor, said it was a “serious error” to allow the EKVE to go through the forest reserve.

“The reserve is critical for the environment as it provides environmental and ecological life support to the urban population. The state government should not view forest reserves as a cheap or convenient source of land for highway concessionaires when in fact it is the costliest land as it can never be replaced once destroyed,” he said in a statement on Monday.

He rightfully pointed out forest reserves and green lungs in critical areas are being felled in the name of development.

He also said the local councillors should fulfill their sworn duty to act in the public’s interest and not allow the highway to go through the forest reserve.

It is clear Fernandez is not against the construction of the highway but the mere fact it cuts through a prized possession — a green lung.

We are now so desperate for a taste of the wilderness that many are willing to spend hundreds, if not thousands, a night to sleep in a jungle-like environment. Children find soaking their feet into a cold stream or running around barefooted on a field something unusual. We have lost touch with our environment.

But the state and federal governments know they will get away with Suke and EKVE. This is because Ampang folks seem “fine” with the construction. Unlike the more aggressive residents in Petaling Jaya, who thumped tables and erected banners calling for the axing of Kidex, the only banner visible against the Suke was once erected near the 160-year-old Ampang Amithaba near the LRT station.
And the silence will be misconstrued as acceptance.

Sadly, the wildlife in Bukit Belacan and the surrounding areas do not have the capabilities of putting up banners and protesting. They will have to make do and move on. No one ever thinks about their roles in our ecosystem.

If Azmin truly appreciates nature, then he would do the right thing.

Otherwise, we will just have to appreciate the trees and rivers on the wallpaper that decorates our mobile phone screens.