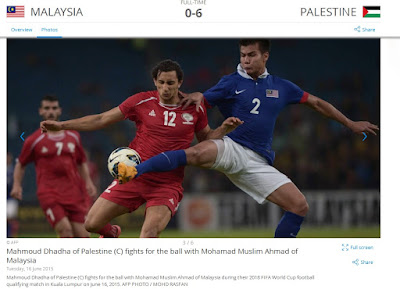 Bookies had attempted to fix a world cup qualifying match in Kuala Lumpur, sources have revealed, as the FA of Malaysia (FAM) will continue to keep a close eye on the matter.

Insiders revealed a foreigner "had hooked up" with a local match fixer to manipulate the Malaysia-Palestine match in favour of the host team at the National Stadium in Bukit Jalil on June 16. Malaysia, however, were hammered 6-0 by the middle east outfit.

"Our information has revealed there were at least two people involved. They had tried to manipulate the match but we believed they failed to do and there were no irregular betting patterns for the match," an insider said.

An Asian Footabll Confederation (AFC) source confirmed the regional body was well aware of the allegation but said the case had since been classified as NFA (no further action).

FAM integrity department head Osman Bakar said he was notified about the matter by AFC and had cautioned the coaches and players prior the match.

"Yes, we were informed but there was nothing more to it. I've been keeping an eye on such cases since 2012 but it's always a situation of allegations without anything concrete for us to follow through," he said.