GOING NUTS: Can we all get along? 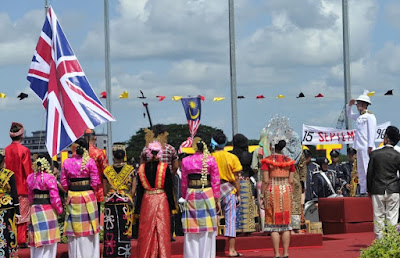 
MERDEKA is just over a month away and Malaysia Day a further 16 days down the road.
To most Malaysians Aug 31 is the bigger celebration and it was only since 2010 that Malaysia Day became a public holiday — even though this is when we truly became the nation we are today following the inclusion of Sabah and Sarawak.

Shouldn’t we be celebrating this on a grander scale?

So it is not hard to sympathise with the organisers of the Sarawak Freedom and Independent Walk on July 22 who are pressing for the state to make that date a public holiday to celebrate the day Sarawak was granted independence by the British colonial rulers in 1963.

However, as usually is the case when it involves east Malaysians, many have jumped on the bandwagon and there were reports some wanted to misuse the event to talk about Sarawak seceding from Malaysia.

And as usual, the police, led by IGP Tan Sri Khalid Abu Bakar, have acted quickly to haul up organiser Peter John Jaban for questioning.

After all, he is just a commoner.

Meanwhile, Johor prince Tunku Idris Ibrahim who twice posted on Instagram about the possibility of Johor leaving Malaysia, has yet to be questioned.

This issue was raised in this column on July 7 and checks revealed no further action.

Or perhaps the police have spoken to Tunku Idris and didn’t reveal it to the media in which case the adage: “Justice should not only be done but also be seen to be done” is apt.

How can we respect the police when there is a blatant case of double standards? Why shoud the rich and powerful be above the law?

Many Sarawakians feel “used” by the federal government.

The quote you often heard if you travel there is “our resources such as oil and timber are taken and only a minimal amount comes back.”

They feel saying the Sarawak Freedom and Independent Walk is a means to secede is just an excuse to oppress them further.

Many do not want to break away. All they want is some form recognition as equals to the semanjung states.

Is that too much to ask?

Friday’s friendly between Liverpool and a Malaysia XI threw up the question of naturalised players once again.

Wleh opened the scoring for Malaysia XI while Jordan Ibe equalised for the Reds.

Dollah has been an advocate of using naturalised players while his biggest critic, former Johor FA president Tunku Ismail Ibrahim, is firmly against it.

The Johor crown prince reiterated his stand on Thursday when, besides blasting FA of Malaysia and their president Tengku Abdullah Shah for their shortcomings, urged FAM not to take shortcuts in developing the national team.

It is a delicate balance but superpowers such as Spain, Germany and Italy have used or are still using naturalised players — to great effect.

However, before Dollah and FAM do go down that road, they must ensure they have exhausted the talent pool at their disposal.

As mentioned in Going Nuts on March 24, having naturalised players could help Malaysia in the short term but only if the right players are chosen and th said players have some sort of connection to Malaysia like Junior Eldstal and Brendan Gan.

If we have to weigh the options before opting to naturalise a player and we must not be like our neighbours who “buy” players for the sake of it.

It is a case of better late than never for the Kuala Lumpur City Grand Prix organisers who belatedly will apply for a license from the Sports Commissioner’s Office.

Malay Mail had quoted Sports Commissioner Datuk Zaiton Othman on Friday as saying her office was unaware of any application for the race.

Failure to obtain a licence breaches the Sports Development Act 1997 which carries a fine of up to RM5,000 or a jail term or both.

And it was only yesterday that the traffic management plan was released — less than two weeks before next week’s event!

No wonder the public, business owners and those involved in public transportation have been up in arms over the lack of information.

Malay Mail supports the race but we have been highlighting the problems faced by the people including the safety of pedestrian since last week as a matter of public interest.

Motorsports expert Hanifah Yoong who shared how the event could be better, is nonetheless, optimistic the race would be a success.

We certainly hope so.