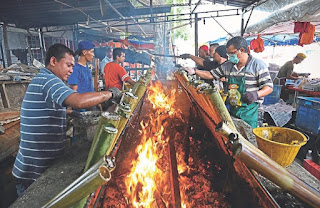 SWEAT trickled from his forehead and he used a Good Morning towel to quickly wipe it off.
He was monitoring the row of bamboo filled with glutinous rice as I waited eagerly by the roadside.
Despite having visited several friends earlier in the day, the quest was to find more fresh lemang on the first day of Aidilfitri — and it was not easy.
Instead, I was greeted by rows of makeshift durian stalls. If not for the ridiculously hot weather, I would have surrendered to eating durian for lunch, dinner and even supper.
After a 30-minute drive, I found a lemang stall at Bukit Indah, Ampang. It was worth the effort. The price ranged between RM14 and RM18 each — more expensive than last year.
How was business, I asked as he monitored the lemang burning on the hot charcoal fire.
“It can be better,” he replied.
“With the GST (Goods and Services Tax) and economy, people are thinking twice about spending.
“Do you hear any firecrackers?” he asked, saying many were hesitant to burn money — literally.
Justifying the price hike, he said it was no longer cheap to make lemang.
“Takde untung (no profit) … just enough to cover cost.
“My friends who are running businesses also said GST has affected them. It’s no longer cheap and traders have no choice but to pass the price difference to the consumers.”
He described the nation’s economy as “shaky”, saying the comparison between the ringgit and the Singapore dollar says it all. He also spoke about the “other national issues”, mainly revolving 1Malaysia Development Bhd and the RM2.6 billion saga.
“One Singapore dollar is about RM2.78. That’s just ridiculous. A lot of us are feeling it. I’m sure you are feeling it too.”
I smiled.
But Mr Operator, clad in a striking blue Baju Melayu — minus songkok and sampin — tried to be optimistic.
“I’m lucky lemang is food for all. The Chinese, Indians … they too love lemang so I’m not worried.”
The government and analysts remain bullish about the economy, insisting the downfall of the ringgit is only temporary.
This despite inflation increasing last month due to higher fuel and food prices.
GST, they say, will help beef up the nation’s coffers. Nothing against the tax scheme but many continue to lament the timing of its introduction.
Also, a large number of people remain unclear on how GST would help them, and the country, in the long run.
But defenders argued while critics continued to rant about the rising cost of living, ridiculously priced real estate and low wages, they have done little to change their lifestyles.
They claimed those who whine find solace by drinking RM15 coffee and splurging on latest gadgets or even vehicles.
So spending money on lemang is not so bad after all, I told myself as I left.
We are facing interesting times but RM14 for a roll of lemang, accompanied by home cooked rendang, was a small price to pay to put a smile on my face.

Nature also puts a smile on our faces

The rising cost of living has also got people thinking about spending on vacations.
Many are bogged down with work and are unable to plan their leave in advance and make last minute reservations which tend to be pricey.
July is never a good time to travel if money is your greatest concern as it is the “summer break” and travelling is considered more expensive.
Several friends and I instead took up Tourism Malaysia’s Dekat Je challenge.
The campaign is to remind Malaysians there are many places they can travel to over the weekend without having to take time off from work.
And our dekat je trip was literally close by. Hungry for some jungle experience, the handful of us made our way to Serendah — an hour’s drive from Kuala Lumpur.
We spent time at the waterfalls and stayed a night at a nearby jungle retreat.
Days later, we soaked our feet in the cool water at Hutan Lipur Ampang (better known as Bukit Belacan among the locals) before enjoying a majestic view of a beautiful lake at the top of a hill in Taman TAR (also in Ampang).
The trips, among the many places we visited, showed how we were able to connect  — we talked, we laughed and we got to know each other better.
Even other visitors were quick to flash a smile and greet us. It is a far cry from the uptight personality many tend to portray when they are soaked up into the hustle and bustle of the city life.
The Dekat Je campaign is a good way to enjoy beautiful locations in our backyard. It does not burn a hole in our pockets and allows us to reconnect with each other and nature.
And just like the yummy lemang, such trips can certainly put a smile on our faces.