What does asking PM to resign mean? 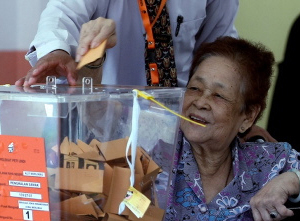 FIRST of all, we should be fully aware that political stability is of utmost importance for the general well-being of the citizens.

No country in the world which is politically unstable is able to develop economically or plan for the future general well being of its citizens. Political instability will not only frighten away investors but may also cause capital flight from the country by its own corporate players.

Prolonged political instability will have immense negative practical impact on the ordinary citizen in terms of rising unemployment, increased cost of living, lowering of the quality and standard of living and so on. These in turn will certainly cause other social problems such as increase in crime rate, increase in corruption and wastage of national resources.

In short, when the politicians fight, we suffer. We have been having political instability for far too long.

The second factor which responsible ordinary citizens should understand is that the primary concern of all politicians is to achieve effective control and consolidation of power.

Hence, political instability caused by political squabbles is essentially a contest for power. The ordinary citizen will never be able to imagine the extent to which and, the amount of resources that the politicians are willing to use to win in that power contest.

The call, therefore, for a democratically elected prime minster to resign may be the beginning of a political crisis, especially if the prime minister has the support of the majority of the Members of Parliament.

The crisis can escalate into a state of political instability if various strategies and tactics are used to forcibly pressure the prime minister to resign unless the rule of law is enforced by the relevant institutions.

Let us visit the Federal Constitution.

Article 43 (2) of the Federal Constitution provides that “the Cabinet shall be appointed as follows, that is to say: a) the Yang diPertuan Agong shall first appoint as perdana menteri (prime minister) to preside over the Cabinet a member of the house of Representatives who in his judgment is likely to command the confidence of the majority of the members of that house; and (b) he shall on the advice of the prime minister appoint other menteri (ministers) from among the members of either house of Parliament”; By virtue of article 43 (2) therefore, the prime minister appointed by the Agong is the person who, in his judgment, commands the confidence of the majority of the members of Parliament.

Article 43 (3) clearly provides that “the Cabinet shall be collectively responsible to Parliament”.

According to this logic of the Federal Constitution therefore, no Cabinet member can blame the prime minister alone for any policy of the government of the day.

If they disagree they should resign, as for example, how Zaid Ibrahim and Musa Hitam have done. If they remain, then they are expected to support the prime minister unless they are so lacking in principles, ethics and common morals.

Hence, any attempt to compel a prime minister without just reasons to resign is actually a call to compel the entire Cabinet to resign or to compel the Parliament to be dissolved. With respect, I believe this is something that even some Cabinet ministers are not aware of.

The Federal Constitution provides that the legal situation in which a prime minister should resign is when he no longer commands the support of the majority of the Members of Parliament.

The position of Tun Abdullah Badawi and Tunku Abdul Rahman which often arises in discussions on Article 43 (4) are completely different scenarios in the sense that they did not resign due to a vote of no confidence in Parliament. Hence, it is understandable why their cabinet remained in tact when they voluntarily resigned from the post of prime minister.

The above provisions in the Federal Constitution are so drafted to ensure maximum protection possible for the democratic process and to prevent the abuse of the voting rights of the ordinary citizens by powerful opposing political groups to pick and choose the prime minister that they want as and when they want outside the general election.

Further, proxy leadership, by its nature will not allow for any fresh political reforms or policies and may also be a tool to cover for past malpractices of the previous government, if any. This type of leadership also puts the sitting prime minister forever in a state of duress and potential threat by a powerful group who may at anytime move to forcibly remove him.

The ordinary citizen is given a powerful tool in the form a vote every four to five years to chose the government that they want. They know fully well who will be the prime minister in the event a particular party wins. Any attempt to interfere with this voting right will have serious consequences for democracy and citizen participation in choosing leaders.

It is a right that the ordinary citizen must religiously guard from being subverted by powerful groups unseen in the public eye.

Jahaberdeen is a senior lawyer and founder of Rapera, a movement that encourages thinking and compassionate citizens. He can be reached at rapera.jay@gmail.com.
federal constitution government Jahaberdeen Mohamed Yunoos lawyer Malaysia politics Prime Minister