Award-winning Liew inspired more than ever 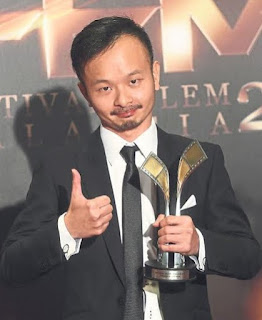 KUALA LUMPUR — Most would have spent the night partying hard, but Liew Seng Tat just wanted to make another movie.

His movie, Lelaki Harapan Dunia, bagged the main awards of the night — Best Film and Best Original Story while the film’s young star Rykarl Iskandar was named Best Child Actor.
“I celebrated but not hard enough to get a hangover,” Liew said in jest.

“I’m inspired. Winning four awards, including best director, got me thinking of my next project. It’s not about trying to make a statement or worry about winning awards but it’s just going back to the basics of making good movies and I just want to do that.”

He admitted he was disturbed by allegations made by certain quarters, including industry players, that the movie insulted Malays and Islam after it hit cinemas on Nov 27 last year.

The movie was about the old Malay tradition of angkat rumah (house moving) where villagers would carry a house from one location to another.

“But I also saw it (criticisms) differently. People started having conversations, dialogues.
“They talked about race, religion, social issues ... this is important as we have not been talking enough. By  talking, we can understand each other better.

“If I can do it (encourage communication) through my art, I’ll do it ... I want to do it.
He added: “I enjoy the ha,ha,ha (comedy) movies but it’s not the type I want to make.

“Movies like Lelaki (Harapan Dunia) come once in awhile. If you judge it based on ticket sales, then we didn’t do well but in other aspects we scored.”

Liew said it was vital to get more people interested in such movies.

“Comedies have been around for decades, so it is natural they have a large fan base. We need to make more movies like Lelaki Harapan Dunia and do it regularly. Our job is to build an audience and it is a big task.”

Producer Sharon Gan was elated with the big win as the movie would be shown in several other nations namely Taiwan, South Korea and Romania.

“Our industry is all about social observation and the movie was a very unique concept. The support shown by many parties and by the team made a difference. We worked well together.”

She, too, was eager to make more movies.

“I’m reading a lot of scripts at the moment and in the midst of developing new projects.