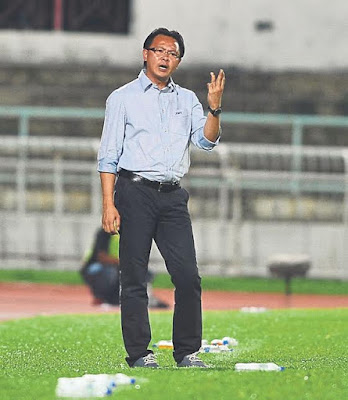 The former international has barely three days with the players before Harimau Malaya host Saudi Arabia at the Shah Alam Stadium on Tuesday.

“They (players) are down. No words can describe how they feel. We could be looking at some of them giving up, or being replaced if they are not mentally strong,” said a source within the national coaching set-up.

“Ong met the players at a hotel in Petaling Jaya yesterday to motivate them. It’s not easy for him too, as this was thrown upon him without warning.”

Another insider said Ong, the Under-23 Harimau Muda coach, gulped when told of his new role.

“He even described it as 'suicidal'. But Ong is on FAM’s payroll and said he was duty-bound to take up the challenge."

The insider added Ong, who was contemplating leaving the national stable, could rethink his exit plan.

“Ong has nothing to lose. This could turn out to be a blessing in disguise if the team gets a good outcome against the Saudis. The key is to forget the UAE match. It is not easy but the players just have to do it.

“No one would want to be in Ong’s position. The pressure is immense. Looking at the bashing from the fans and media, it will take an emotionally strong man to make sure the team pulls through.”

Ong has been a crowd favourite after his squad won the 2011 SEA Games gold medal and 2013 Merdeka Tournament.

His teams, however, failed to defend the SEA Games title after failing to get past the semifinals in 2013 and were booted out during the group stages at the Singapore Games in June.
dollah salleh FA of Malaysia FAM football Malaysia Ong Kim Swee uae