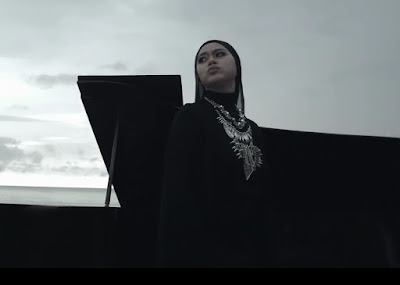 SHE put on a mesmerising performance that awed the audience. Her rendition of the classic hit Seri Mersing was unorthodox compared to versions by Saloma, Datuk Sharifah Aini and Datuk Siti Nurhaliza.

But one cannot imagine the agony and despair Najwa Mahiaddin went through at the 27th Malaysian Film Festival, which was organised by National Film Development Corporation (Finas) last Saturday.

And one would not fault her if she had shed a tear or two when she was not allowed to perform at the eleventh hour. In fact, the term eleventh hour is an understatement for the host, Nabil Ahmad, was just about to invite her on stage when he received orders to cut for a commercial break.

Nabil, a comedian, could not hide his expression as he was confused by the situation. After the commercial break, Najwa was nowhere to be seen.

Backstage, her representatives had a tough time understanding why she could not perform despite Finas pre-approving her performance.

“Najwa was fuming when she learnt what happened,” said an industry insider.

“It was only later that Finas decided she could perform. Amy Search was supposed to sing last, instead Najwa was the closing act.”

The insider admitted the episode turned out to be a blessing in disguise for the daughter of axed deputy prime minister Tan Sri Muhyiddin Yassin, who won the hearts of many with her soulful performance.

“She captivated the audience and was one of the best acts that night. There were many who sympathised with her. Social media was abuzz ... so no one can pretend it didn’t happen.”
Najwa had, after the show, thanked Finas for “finally allowing her to perform”, through her Twitter account as reported by Malay Mail on Monday.

She has remained silent since, perhaps not wanting to rock the boat. Industry observers, however, are not impressed.

A post-mortem of the event was held on Monday where those attended discussed the “very prominent person” who made the decision.

Finas was told they had plenty of explaining to do. Those who attended the meeting said it was highly unlikely Finas would document what had actually transpired in writing.

One wonders why this “VIP” would  want to disallow Najwa from singing?

“It smells (of) politics ... rotten to the core,” said another industry insider.

Efforts to speak to Finas director general Datuk Kamil Othman since Sunday had been futile. Its corporate communications department told Malay Mail on Monday it would call for a press conference regarding the matter “soon”.

Najwa was in the limelight last month following the release of her song After the Rain. She said the song was dedicated to Malaysians to cope with the economic sluggishness and political uncertainty. It looks like she can now dedicate the song to herself.

Will she be ‘banned’ from other gigs just because of her father?

This comes at a time where Muhyiddin, who was dropped from the Cabinet on July 28, could either be suspended or kicked out from Umno following his “vocal stand” on various issues, including 1Malaysia Development Berhad.

The party’s supreme council meets today. The meeting has been postponed twice since the Cabinet reshuffle.

Some requested Muhyiddin be allowed to stay, giving the assurance he would toe the line when he addressed the delegates during the Umno general assembly later this year.

Others have demanded for outright sacking while there were those who believe he had committed enough faults to be referred to the party’s disciplinary board.

That aside, Najwa’s fate remains uncertain.

She has, in so many ways, tried to distance herself from being labelled as “anak menteri”.

Whatever fault her father had apparently committed, Najwa should not suffer the consequences.
I doubt Datuk Seri Ismail Sabri Yaakob would be pleased if his singer son, Dafi, was placed in a similar situation if things do not work out for the rural and regional development minister.

Just like sports, there is no place for politics in the arts scene. The industry is hungry for the right kind of attention.

There must be an explanation. Name the supposed “VIP”. Explain why the decision was made. Someone must be answerable. Do not pretend like nothing happened.

Art is unique and talented individuals like Najwa should not be dragged through the mud.

Chin up and stay strong, Najwa. Just as you sang in After the Rain: “We may all fall down, but we all get up. Hold your head up, Malaysia (or in this case, Najwa) ... after the rain comes the sun.”