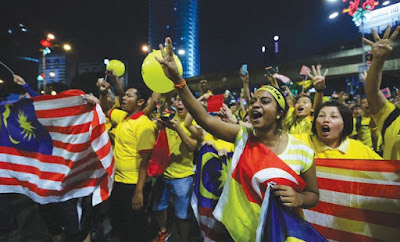 Haresh Says
By Haresh Deol
THE numbers ranged between 25,000 and 500,000. Some stressed the bulk who attended Bersih 4 over the weekend were Chinese.

But two men who participated in the gathering were unperturbed with such talk.
“Would it make a difference if I am Justin Lee, Justin Nathan or Justin Mohammed? Whether it is 25,000 or 500,000 people, Malaysians of all walks of life participated and that counts the most,” said Justin, who insisted his last name was immaterial.
Justin joined many others who were eager to be heard over the weekend. He said those who attended the rally, deemed illegal by the authorities, had various grouses but were united in their objective — to demand a cleaner and transparent Malaysia.
“You can’t place a number. There were many others who could not make it for the rally but were with us in spirit.
“I was at Dataran Maybank and there seemed to be more Chinese. My friends who were at Sogo said there were more Malays there. But who was counting?”
He added that most of the speakers who addressed the crowd were non-Chinese.
“Just because PKR’s Rafizi (Ramli) said there were more Chinese, we must agree with him? He was only at one location, how would he know?
“To the judgmental lot, were you at the rally? Or did you judge based on what you heard from your friends and pictures you saw on your Facebook timeline?”
This racial talk has got many riled up. The 34-hour rally was even labelled a DAP-led agenda and it was presumed the lack of Malay support was a result of PAS not being in the picture.
Civil society rights in Malaysia are usually championed by political parties who more often than not are defined by race (Umno/PAS — Malay, MCA — Chinese, MIC — Indian ... you get my point). Thus it comes to no surprise why our observation towards everything is racial in nature.
MCA president Datuk Seri Liow Tiong Lai was quick to say the assembly had nothing to do with race. He is right. Or perhaps the echoes of ‘apa lagi Cina mau’, said right after the 2013 general election, continue to ring in his ears. The “lack of Chinese support” saw the downfall of his predecessor Datuk Seri Dr Chua Soi Lek, giving Liow the shivers he, too, could suffer the same fate.
Another participant, Yew, said many had turned up with bright yellow Bersih 4 T-shirts despite a Home Ministry
ban last week.
“We had the T-shirt ban. We had the armed forces chief (Gen Tan Sri Zulkifeli Mohd Zin) saying they would take over if a state of emergency was declared. We also saw provocative and racist posters promising blood bath if the rally continued. It’s 2015 ... such scare tactics do not work anymore,” he said.
“Instead, it made the authorities look pretty bad.”
He wondered if the authorities would maintain a similar stand as the Red Shirts, an anti-Bersih group, pledged to gather 1 million people on Oct 10.
Despite the ban and rally declared illegal, the police did not act. As former Malay Mail editor-in-chief Datuk Ahirudin Attan said, it was “restrain, restrain, restrain” for our men in blue.
In his Aug 29 posting on Rocky’s Bru, Ahirudin wrote: “Outnumbered and closely watched, the cops — most of them on the front-line are in their youths — have also to exercise restrain at all times throughout Bersih 4. That’s the order that has been given to them and they have to follow orders. Unlike riot police in Western countries, ours are not seasoned or used to handling protesters. Ours aren’t brutal.”
It turned out to be a wise order. Cool heads prevailed.
It was not an easy thing for the cops, especially with their political masters breathing down their necks. But the way they handled the crowd and traffic won the admiration of many.
Words on the banners carried by Bersih rally-goers, and their chants, were already subjects on social media and spoken about at coffee shops. They were nothing new.
Some politicians rubbished criticisms made by the participants. The ‘mature’ few, well aware of the ground sentiments, chose to remain silent — even on ‘Twitterjaya’.
There were those who jumped on the bandwagon. Tun Dr Mahathir Mohamad, who has been critical about Prime Minister Datuk Seri Najib Razak’s administration in recent months, made his presence felt over the two-day gathering. Even his loyalists readily admitted they were puzzled by his action.
While he remains a hit among many, critics of the former prime minister argued he was vocal about such gatherings in the past.
They also said Dr Mahathir, who had repeatedly said there was a need to censor the Internet, was ‘blessed’ for not having to deal with social media and such resentment during his era.
Dr Mahathir said he “just wanted to see” the gathering and “was there (at the rally) for the people”. He was, however, no where to be seen when the people gathered at Dataran Merdeka for the Merdeka Day celebrations on Monday.
Is taking to the streets right? Your answer will depend on which side of the fence you’re on but it should never cause mayhem to the country.
So, did Justin and Yew waste their time?
“It took decades before the Internal Security Act was repealed. This is only the fourth rally. Maybe a few more will make a difference,” said Justin.
Yew added: “It is about making ourselves heard. All we want is for Malaysia to enjoy good economy and uphold transparency.”
The two, 25,000 or 500,000 rally-goers have said their piece. Now it is for the authorities to take cue and move forward.
Maybe the next gathering, if any, should be devoid of political representation and led by civil society movements. Such voices must be by the people, for the people to benefit the people.
Please do away with the racial connotations and dear leaders, start practising what you preach. Only then, you will win the hearts of many.